Transformational tech that could change the world

Lux Research releases annual list of technologies and trends that will transform the way we live, work and play

A combination of megatrends, market demand, and new innovations have thrust many new technologies into the spotlight – some that are likely to have the greatest impact during the next 10 years, according to Lux Research 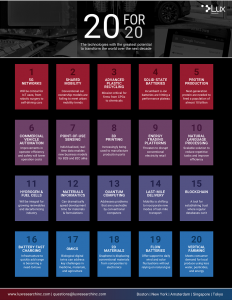 – a leading provider of tech-enabled research and advisory services. Lux has released its annual report identifying and ranking 20 technologies that will reshape the world.

The new report combines the power of insights from technology experts with proprietary data science tools to better guide innovation decision making. Lux’s ‘20 for 2020’ listing is based on innovation interest scores from the Lux Intelligence Engine, along with input from Lux’s leading analysts. It provides data-backed context for the ever-shifting technology landscape and insights into how companies can maximize the investment opportunities these data trends reveal.

The Top 5 Technologies are:

Related Stories
Next-gen batteries beyond Li-ion will be worth $10B
CES 2019 opens with transformative tech that will change lives
Flexible, printed, thin-film batteries represent new era in energy storage
Investors deploy $1.7B to Canadian tech firms in 2016