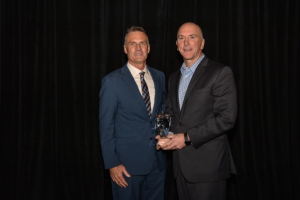 Named to reflect the concept of extraordinary leadership, guidance, and perseverance within the industry, the award recognizes individuals who make significant contributions to the industry over the course of their careers, and sets the standard for those who follow.

“I believe in osmosis; that if I surround myself with smart, high-quality individuals, then perhaps a little will rub off,” says Doherty. “My participation in NEDA and ECIA has been osmosis on steroids, getting the chance to work with and learn from such high-quality people in the industry from the beginning. It’s been a true privilege to participate in the association at the level that I have.”

Promoting the value of the electronics components industry

Doherty has served on the former NEDA board and now ECIA board since 2007. He chaired the ECIA Foundation from 2011-2015, served as the ECIA chair in 2017-2018, and currently chairs the Distribution Council. During his time on the ECIA Foundation Board he was instrumental in guiding it through the merger and identifying a mission of promoting the value of the electronics components industry through developing, leveraging, and deploying educational and awareness-based initiatives. During that time, the Foundation developed programs to benefit universities, FIRST Robotics and Hiring Our Heroes.

Dave has also been involved in planning the ECIA Executive Conference, and served as chair in 2012, the year of Super Storm Sandy. His calm demeanour and unflappable spirit served him well then, and he has been a steady influence through ECIA’s structural transition over the past few years.

“Dave’s contributions to the industry are unmatched and very appreciated,” says Bill Bradford, chief operating officer of the ECIA. “We thank him for his guidance in our industry and the association. His honesty, integrity and knowledge have been an enormous asset for the association over the years.”

Doherty will soon transition off the ECIA Board to focus on his role at Digi-Key, but will continue to support the association in different ways.