Applications are open to join Canada’s first and only Amazon Alexa accelerator. 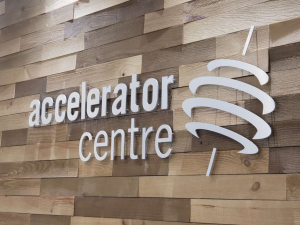 The Accelerator Centre’s (AC) Alexa Voice Tech Accelerator Program launched in Waterloo this fall, thanks to a new collaboration between the  (AC) and Amazon’s Alexa Fund. The accelerator program is designed exclusively for entrepreneurs who are advancing voice-powered technologies. Five companies from across Canada will be selected to join the program.

Beginning December 2, 2019, the Accelerator Centre’s Alexa Voice Tech Accelerator Program runs for six to 12 months and is built on the AC’s world-renowned curriculum-based programming—with a twist.

“The Alexa Voice Tech Accelerator Program builds on our proven program model and is specialized for software, hardware and service companies that have the potential to integrate with Alexa, or directly incorporate Alexa already,” says Clinton Ball, director of client programs and initiatives at the Accelerator Centre. “When an AC client, YOURIKA, was one of nine companies worldwide to be chosen to join the Alexa Accelerator Powered by TechStars in Seattle, we had the unique opportunity to explore what more we could do in house to help accelerate voice technology. We’re really happy to be the first Canadian accelerator that Amazon is collaborating with to take Canadian voice tech to the next level.”

When voice assistants began to appear in 2011 with the release of Siri, few predicted that a new driver for tech innovation was born. Fast forward to 2019, 5.8 million people in Canada use a smart speaker at least once a month—a 51 per cent increase from 2018, according to eMarketer estimates. By 2020, it is projected that 6.7 million people in Canada, or 18 per cent of the population, will use a smart speaker, while American users of voice assistants will surpass 100 million.

In our ever-evolving digital world where speed and convenience are constantly improving, the mass adoption of artificial intelligence in users’ everyday lives is fueling the shift towards voice-powered technologies.

“Applications are open to entrepreneurs who are currently building with Alexa or have Alexa built in, and those who have potential to broaden their products with voice and AI enablement. We are looking for diverse founding teams who are working with interesting technologies and have strong visions of where they see their product or products going in terms of enabling better voice technology experiences,” says Ball.

Successful applicants will also benefit from access to Amazon Alexa devices to build with, Amazon Web Services (AWS) credits and select access to Amazon’s vast mentor network. Select companies will also have the opportunity to participate in a pitch-based Demo Day at Amazon’s headquarters in Seattle, WA.

“Alexa, apply to the Accelerator Centre.”