Kraken Robotic Systems Inc., St. John’s NL, will receive a financial contribution of up to $749,746 from the National Research Council of Canada Industrial Research Assistance Program (NRC IRAP). This funding is being used to support research and development of Kraken’s ThunderFish XL Autonomous Underwater Vehicle (AUV) and is part of Kraken’s $20 million OceanVision project that was announced at the end of June. Kraken’s ThunderFish XL represents further development of the ThunderFish Alpha platform that was recently delivered to Defence Research and Development Canada (DRDC). 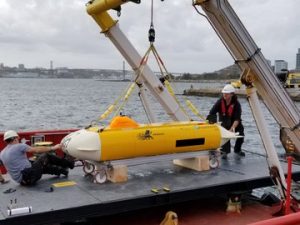 Kraken’s ThunderFish AUV is an innovative marine robot designed for ultra-high resolution seabed imaging and mapping applications. It can be used for a wide range of oceanographic and military tasks including underwater surveys, environmental monitoring, habitat mapping, marine archaeology, inspection of submerged structures, searching for downed aircraft and naval mine countermeasures. ThunderFish carries an array of sensors and custom payload modules, including Kraken’s AquaPix Synthetic Aperture Sonar. The platform is ideal for monitoring or surveillance tasks where cost efficiency, ease of deployment and operational simplicity matters. Its modular design allows for rapid sensor reconfiguration and battery replacement.