A quasi-particle that travels along the interface of a metal and dielectric material may be the solution to problems caused by shrinking electronic components, according to an international team of engineers. 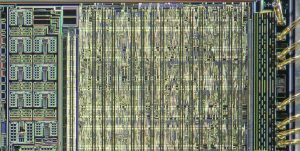 A section of a circuit board showing microcircuits.
IMAGE: ANTOINEBERCOVICI

These electronic components are in our smartphones, tablets, computers and security systems and they are used in hospital equipment, defense installations and our transportation infrastructure. Researchers have explored a variety of ways to solve the problem of connecting various miniaturized components in a world of ever shrinking circuits. While photonics, the use of light to transport information, is attractive because of its speed, this approach is problematic because the waveguides for light are bigger than current microelectronic circuits, which makes connections difficult.

Surface plasmon-polariton (SPP) waves have been known for a long time, but the mathematics behind them requires solving complex equations.  Lakhtakia and colleagues investigated the theoretical transport of information by using an SPP wave as a carrier wave and pulsing the wave in a way similar to the way Morse code electrically pulses through a telegraph line.

The researchers report in a recent issue of Scientific Reports that “The signal can travel long distances without significant loss of fidelity,” and that “signals can possibly be transferred by SPP waves over several tens of micrometers (of air) in microelectronic chips.” They also note that calculations indicate that SPP waves can transfer information around a concave corner — a situation, along with air gaps, that is common in microcircuitry.

SPPs are what give gold its particular shimmery shine

SPPs are a group phenomenon. These quasi-particles travel along the interface of a conducting metal and a dielectric — a non-conducting material that can support an electromagnetic field — and on a macroscopic level, appear as a wave. According to Lakhtakia, SPPs are what give gold its particular shimmery shine. A surface effect, under certain conditions electrons in the metal and polarized charges in the dielectric material can act together and form an SPP wave. This wave, guided by the interface of the two materials can continue propagating even if the metal wire has a break or the metal dielectric interface terminates abruptly.  The SPP wave can travel in air for a few 10s of micrometers or the equivalent of 600 transistors laid end to end in a 14 nanometer technology chips.

SPP waves also only travel when in close proximity to the interface, so they do not produce crosstalk. The problem with using SPP waves in designing circuits is that while researchers know experimentally that they exist, the theoretical underpinnings of the phenomenon were less defined. The Maxwell equations that govern SPP waves cover continuum of frequencies and are complicated.

“Instead of solving the Maxwell equations frequency by frequency, which is impractical and prone to debilitating computational errors, we took multiple snapshots of the electromagnetic fields,” said Lakhtakia.

These snapshots, strung together, become a movie that shows the propagation of the pulse-modulated SPP wave.

“We are studying tough problems,” said Lakhtakia. “We are studying problems that were unsolvable 10 years ago. Improved computational components changed our way of thinking about these problems, but we still need more memory.”

Also working on this project were Rajan Agrahari, graduate student in electronics engineering and Pradip K. Jain, professor of electronics engineering, both at the Indian Institute of Technology, Varanasi, India. The Council of Scientific and Industrial Research, India, and the Charles Godfrey Binder Endowment at Penn State, supported this work.