Sidewalk Labs laid out its ambitious vision of the future of cities with its plan for Toronto’s eastern waterfront, but has already received fresh criticism for its potential overreach.

The plan sets out what Sidewalk Labs, a subsidiary of Google parent-company Alphabet Inc., hopes will be a blueprint for urban development that will incorporate the latest concepts in building design, mobility, sustainability and inclusivity. It hopes to achieve nothing less than to improve everything about how people work and live, Sidewalk Labs CEO Dan Doctoroff said at a media presentation Monday. 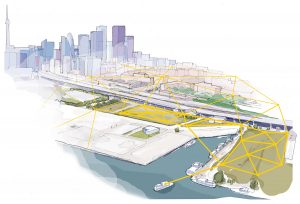 “Our proposal aims to do something extraordinary on Toronto’s eastern waterfront – create a new model of inclusive growth, where cutting-edge technology and forward-thinking urban design combine to achieve an ambitious improvement in every aspect of the way we live.”

Sidewalk’s proposal sets out detailed plans for a residential-focused 4.8-hectare Quayside site, but also goes much farther to envision the foundations of a 77-hectare eastern waterfront district along similar design ideals. The expanded scope includes its proposed development of a nearly eight-hectare site called Villiers West where it wants to build a new Google Canada headquarters along with attracting other office tenants.

The scope of the vision has been raised as a concern by Waterfront Toronto – a partnership involving the City of Toronto, Ontario and the federal government to oversee waterfront development – that is now reviewing the more than 1,500-page plan. Steve Diamond, chairman of the Waterfront board of directors, said in a letter that the wider district concept is “premature.”

“Waterfront Toronto must first see its goals and objectives achieved at Quayside before deciding whether to work together in other areas.”

Sidewalk’s plan, however, relies in part on the profitability of its Villiers West proposal to subsidize the 40 per cent of housing that would be below market rate at Quayside, as well as support wider investments such as $80 million for a mass timber production facility in Ontario. Doctoroff said in an interview that he wasn’t setting any “red lines” but that, as with needing transit to the area, Sidewalk’s plan would be more difficult without the addition of Villiers West.

The Villiers West district, which combined with Quayside make up about seven per cent of the eastern waterfront, also helps underpin the wider vision Sidewalk Labs has outlined for a 77-hectare area it has called an innovative design and economic acceleration district. Sidewalk Labs has proposed that the district be subject to a special set of regulatory and policy tools that would, at its “fullest scale” according to a study by urbanMetrics, create 44,000 jobs and spur $38 billion in investment by 2040.

Committed to funding and financing

The company, which has committed to funding and financing up to $1.3 billion of that investment including as developer of its two proposed sites, has also proposed that it be compensated if certain performance metrics are met on the wider vision. Waterfront has raised concerns about Sidewalk Labs’ proposal to be the lead developer at Quayside, which was not contemplated in the plan development agreement, as well as concerns about required government commitments on things like transit, regulations, and funding before proceeding, and issues around data management.

Waterfront Toronto’s board is now conducting its own consultations and evaluations before an expected vote on the plan in December or January. Ontario Infrastructure Minister Laurie Scott said in a statement that the government has faith in the board, and that its guiding principles for waterfront development continue to be “respect for taxpayer dollars, strong administrative oversight and the protection of people’s privacy.” The issue of privacy has been a key criticism of the project, as concerns about the influence and power of big technology companies increase.

Sidewalk Labs has recommended that an independent, government sanctioned trust be established to set guidelines and oversee data collection, while also committing not to sell personal information or use it for advertising. The proposal hasn’t been enough for some critics, such as community opponents #BlockSidewalk, which has called for the current development process to be abandoned over governance concerns.