No winners in the semiconductor market

Revenue drops by largest rate in a decade in the first quarter: IHS Markit

The world’s top-10 semiconductor suppliers all suffered year-over-year sales declines in the first quarter of 2019 as the global chip market posted its worst quarterly performance in 10 years. Global chip revenue fell to $101.2 billion in the first quarter, down 12.9 percent from $116.2 billion during the first three months of 2018. This represented the largest year-over-year quarterly decrease since the second quarter of 2009.

Memory chips were the primary culprit for the sales plunge. If memory were excluded from total semiconductor revenue, the market would have declined by just 4.4 percent on a year-over-year basis during the quarter. However, other factors also contributed to the market’s dismal performance, including a rise in excess inventory and falling demand from key end-markets.

Among the top-10 suppliers, second-ranked Samsung of South Korea endured the largest drop in revenue in the first quarter, with sales declining by 34.6 year-over-year. Samsung was disproportionately impacted by falling demand, rising inventory and plunging prices for memory chips, which constituted nearly 84 percent of the company’s semiconductor business in the first quarter.

The other memory-oriented companies in the top-10 also were heavily impacted by the downturn, with third-ranked SK Hynix of South Korea experiencing a 26.3 percent drop and fourth-placed Micron of the United States declining by 22.5 percent compared to the first quarter of 2018. The memory market underwent a sharp decline in the first quarter, with overall sales falling by 25 percent compared to the fourth quarter of 2018. DRAM revenue fell by 26.1 percent sequentially, while NAND flash declined by 23.8 percent.

U.S. supplier Intel posted the best performance among the top-10 competitors, with sales falling by a negligible 0.3 percent year-over-year. Intel escaped the worst effects of the chip downturn because the company is not heavily exposed to memory sales, with memory chips accounting for less than 6 percent of company revenue. However, the company’s microprocessor business was still affected by rising inventory and decreasing demand from the PC, enterprise and cloud sectors.

The overall market for chips for compute applications fell by 16.7 percent in the first quarter. Based on its relatively strong results, Intel was able to hold on to the top spot in the semiconductor rankings in the first quarter. This represented the second consecutive quarter that Intel has held market leadership, after moving past Samsung in the fourth quarter of 2018.

Despite the precipitous downturn in market conditions, the rankings of the top-10 suppliers remained largely unchanged compared to the fourth quarter of 2018. 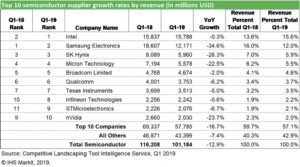 However, German supplier Infineon rose three ranks compared to the fourth quarter of 2018 to take eighth place. Infineon outperformed its competitors by limiting its sequential revenue decline to just 0.3 percent. The company managed to post a relatively strong performance in the automotive chip business.

Meanwhile, Switzerland-based STMicroelectronics’ sales declined by 6.7 percent year-over-year because of sluggish sales in the wireless market.

U.S.-based Nvidia in 2018 had been riding high on sales of graphics processing units (GPUs) used for artificial intelligence applications. However, the company posted the third-worst results of the top-10 players in the first quarter, with a 23.7 percent year-over-year revenue drop. Nvidia’s results were impacted by the steep decline of cryptocurrency and Advanced Micro Devices’ move to push its GPU products into data center applications—directly competing with Nvidia.