May risk falling behind the curve, says GlobalData

The fourth industrial revolution, dubbed Industry 4.0, holds a promise in addressing the inefficiencies in traditional manufacturing by the application of disruptive technologies, says GlobalData, a data and analytics company. 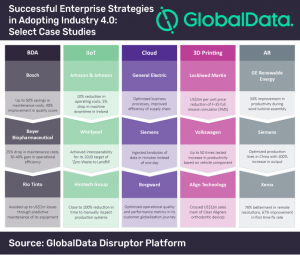 Industry 4.0 is simply the next phase in the digital transformation of manufacturing through the use of data exchange techniques, advanced technologies and flexible automation for increased efficiency. It principally aims at enhanced human-machine interaction to drive interconnectivity, information transparency and autonomous decision making.

“Industry 4.0 is increasingly gaining importance in manufacturing owing to its capability in marrying operational technology with information technology to build a cyber-physical production system that can deliver higher-quality products at lower costs,” says Kiran Raj, disruptive tech analyst at GlobalData.

Frees up humans with machines in tiresome and dangerous tasks

BDA plays a remarkable role in the manufacturing environment by collecting and analyzing huge volumes of data coming from management systems and sensors fitted to the production equipment. It frees up humans with machines in tiresome and dangerous tasks, thereby increasing efficiency as well as safety.

Mining giant Rio Tinto leveraged BDA and avoided the unexpected break down of its production vehicles estimated to cost up to US$2m. Its so-called autonomous haulage system (AHS) has close to 200 sensors producing more than 4TB of valuable vehicle data per day, including exact location, speed and other real-time metrics, across the fleet of 900 AHS.

From product prototyping to mass production of custom tooling, the advancement in 3D printing is phenomenal and opened up numerous possibilities for production.

Increase productivity up to 50 times

German carmaker Volkswagen became the first manufacturer ready to use the latest 3D printing technology for mass production in the automotive industry. The technology named HP Metal Jet has been tested to increase productivity up to 50 times compared to the existing 3D printing methods based on the component.

“Industry 4.0 can empower building what many refer to as ‘smart factory’ for a truly productive environment with benefits to manufacturers as well as consumers such as enhanced communication, real-time monitoring, advanced data analysis and self-diagnosis,” Raj says.

Ideally, a smart factory is flexibly automated and self-monitoring where machines, materials and humans communicate with each other, sparing workers for other productive tasks and ultimately optimizing the design and production processes for elevated operational efficiency.

Beneath the layers, however, there are critical challenges for manufacturers such as data management, upskilling employees and cyber incidents for which fortunately there are steps and preventive measures without impacting production.

“While incumbents, such as Bosch, GE and Siemens, have been muscling to capture a sizeable share of Industry 4.0, many manufacturers are yet to consider serious investments,” Raj concludes. “Given the benefits over threats, a wait and watch stance may risk their competitive position in the future of manufacturing.”