Velcro-like connector is for universal use in electronics assembly

This year’s Hermes Award, which ranks among the world’s most coveted technology prizes, has been captured by NanoWired GmbH for its innovative ‘KlettWelding’ solution – making it possible to easily assemble and connect electronic components at room temperature. The award was presented by Anja Karliczek, Germany’s Minister for Education and Research, at the official Hannover Messe Opening Ceremony yesterday.

NanoWired is a young startup based in Gernsheim, Germany. Its KlettWelding system is an original process because it is fast and eco-friendly and produces permanent connections. It is also a world first in electronics manufacturing. The experts on the independent jury praised the solution as a first-rate innovation with a broad range of applications. Professor Reimund Neugebauer, president of the Fraunhofer-Gesellschaft and chair of the jury, was particularly impressed: “The Hermes Award competition receives numerous outstanding applications, so the winning project really needs to demonstrate innovative future potential, a targeted approach to creating a solution that meets the end user’s needs, and evidence that the product is suitable for use in industrial applications,” said Professor Neugebauer. “This year’s winner is the first process of its kind in the world. It lends itself to a broad range of potential applications in multiple segments, including sensors, semiconductors, automotive systems and consumer goods, offering the ability to switch production processes from soldering to simply pressing components together at room temperature. What’s more, NanoWired’s process is cheaper than soldering and bonding and has already been applied successfully in almost twenty industrial projects.”

In order to enable t 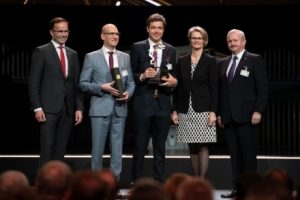 he KlettWelding process, the surfaces of the electronic components to be connected are first coated with a Velcro-like layer of nano-sized metal wires. Components pre-treated in this way can then be connected simply by pressing them together, causing the nanowires to interlock and form a connection that – unlike an actual Velcro connection – is permanent and highly electrically and thermally conductive. Post connection, the bond between the components is highly resilient and able to withstand extreme temperatures, including heat levels well above those needed to destroy conventional solder or glue connections. KlettWelding is also more cost-effective than conventional connection processes and can be used in a wide range of applications in the sensor systems, semiconductor, automotive and consumer products manufacturing industries.

The two runners-up for this year’s Hermes Award are ABB and Arkite NV .