Alex Pinkerton, a high-school student in Austin TX has developed a new kind of magnetic field sensor that may enable a commercially viable brain-computer interface. Forming his own start-up firm around this technology, Brane Interface (BI), the company is a finalist for the 2019 SXSW Interactive Innovation Awards in the Student Innovation category. 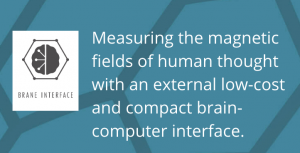 BI is developing a non-invasive brain-computer interface it hopes will be small enough to be worn within earbuds or under a hat.  By using a single atomic layer of carbon (graphene), BI plans to link a human brain with an external digital device, such as a smartphone or computer, by sensing the faint magnetic fields of human thought. Potential applications include participation in fully immersive entertainment systems and enabling those who have been paralyzed to operate robotic limbs using only their thoughts.

Started tinkering with graphene alongside his father

During his freshman year in high school, Alex, alongside his father, started tinkering with graphene.  That year at Christmas, his mother gave him the book Soonish, which explains how it is possible to create a brain-computer interface using magnetic fields generated by a human brain. Years earlier, his father, an entrepreneur and inventor, along with a small team of researchers, spent several years searching for a commercial use of graphene. When they could not find a good match for the team’s technology they put their graphene work on hold.  Alex brought a fresh perspective to the table and helped discover an extremely compelling application of graphene.

Discovered in 2004, graphene is widely regarded as one of the most advanced materials on earth. It is the strongest material known, the thinnest (one atom thick) and has the highest current density limit at room temperature.  The combination of high current density and the single atom thickness of graphene is a great match for BI’s magnetic field sensor and computer models show it helps give the company a million-fold advantage over existing room temperature sensors.  It is this enormous leap in sensitivity that gives BI’s technology the potential to read the faint magnetic fields produced by human thought.

BI has built two proof-of-concept prototypes that use thin polymer membranes. The company is currently fabricating a third prototype utilizing an array of graphene membranes (thus the name “Brane”). BI plans to finish its graphene prototype in 2019 and launch a beta product program in 2021.