The new Schwartz Reisman Innovation Centre will turbocharge the next wave of Canadian innovation, advancing how AI, biomedicine and other disruptive technologies can enrich lives

Thanks to an historic gift to the University of Toronto from Gerald Schwartz and Heather Reisman, the soon-to-be built Schwartz Reisman Innovation Centre will set out to accelerate innovation in Toronto and Canada by creating the country’s largest university-based innovation node. The $100-million investment is the largest donation in U of T’s history and the largest gift ever to the Canadian innovation sector.

The gift will help construct a 750,000-square-foot complex designed to anchor U of T’s unique cluster of world-leading artificial intelligence scientists and biomedical experts, its world-class entrepreneurship network, and the country’s largest concentration of student- and faculty-led startups. 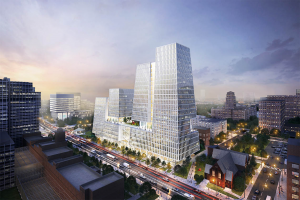 The gift will also support the launch of the newly conceived Schwartz Reisman Institute for Technology and Society, whose mission will be to explore and address the ethical and societal implications of AI and other emerging technologies. The Institute will facilitate cross-disciplinary research and collaboration and will draw on U of T’s signature strengths in the sciences, humanities and social sciences to explore the benefits and challenges that AI, biotechnology, and other technological advances present for our economy, our society and our day-to-day lives.

“The University of Toronto is deeply grateful to Gerry Schwartz and Heather Reisman for their vision and generosity,” says President Meric Gertler. “This extraordinary gift will spark Canadian innovation, boost our economy, and enable a deeper examination of how technology shapes our daily lives. It’s a gift that reflects Gerry and Heather’s entrepreneurial spirit and their deep concern for Canadians and global society.”

“This new complex will contribute enormously to innovation at U of T,” says world-renowned AI pioneer and University Professor Emeritus Geoffrey Hinton. “It will help consolidate Toronto’s leading position in the AI world. The Centre will attract other AI experts and help to spark additional AI-based innovations. It will also bring together scholars from an array of disciplines to study the implications of AI in today’s world.” 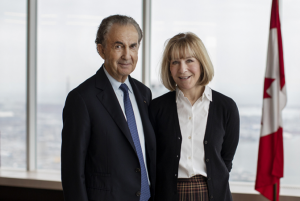 Gerald Schwartz and Heather Reisman: “We’re immensely proud and excited to be part of an initiative that will further spark innovation, anchor talent and ideas in Canada, and illuminate the importance of socially responsible technology” (photo by Nick Iwanyshyn)

Schwartz and Reisman are also among the country’s most generous philanthropists. They have long supported institutions and causes across the country, particularly in the areas of literacy, education, health care and advanced research. Their previous gifts to the University of Toronto have made an immense difference to students, researchers and programs in several faculties. Both have had a long relationship with the university, having served as advisers for numerous strategic initiatives.

This $100-million gift, made through The Gerald Schwartz & Heather Reisman Foundation, was inspired by their belief in the importance of research-based innovation as a driver of economic and social prosperity and their keen interest in the interdisciplinary exploration of how innovative technologies such as AI and regenerative medicine affect societies and individuals.

“U of T is already a global leader in artificial intelligence, biomedicine and the intersections of society and technology,” say the couple. “We’re immensely proud and excited to be part of an initiative that will further spark innovation, anchor talent and ideas in Canada, and illuminate the importance of socially responsible technology.” 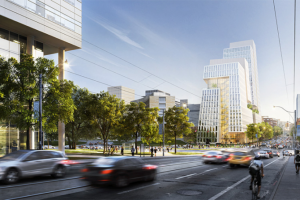 A catalyst for innovation

The Schwartz Reisman Innovation Centre will occupy one of Toronto’s most iconic locations, the northeast corner of College and Queen’s Park.

Designed by WEISS/MANFREDI, one of North America’s leading architectural firms, in collaboration with Teeple Architects, the Centre will be a showcase for “innovation architecture.” The Centre’s stunning layout will feature vertical gardens, soaring atria and collaborative spaces and will promote intellectual exchange and invite the public to take part in events and interact with scholars and innovators. U of T expects the building’s engaging spaces to host thousands of researchers, investors, industry partners and international visitors annually.

In addition to opening up the university to the city, the centre will stimulate economic growth by capitalizing on U of T’s research and innovation prowess and providing space for smaller Canadian companies to grow.

“For the first time, the University of Toronto will have a central facility where young entrepreneurs and faculty can dream big,” says Scott Mabury, vice-president operations & real estate partnerships. “These flagship buildings will have purpose-built spaces for innovation and provide much-needed room for research-based scale-up companies, which will help to keep Canadian ideas and talent in Canada.” 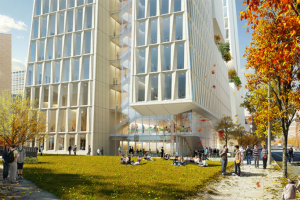 The first tower will house, among other initiatives, the Vector Institute for Artificial Intelligence, a world leader in deep learning and machine learning research. It will also house the newly conceived Schwartz Reisman Institute for Technology and Society.

The second tower will house laboratories for some of the world’s top researchers and innovators in regenerative medicine, genetics and precision medicine. These scientists are investigating the promise of stem cells to repair and regenerate damaged tissues and organs, as well as treat cancer, diabetes, stroke and blindness. This tower will also house programs and organizations devoted to successfully translating these medical innovations into therapies and applications that will improve the lives of people all over the world, positioning Canada as a global leader in the health-care field.

Both towers will provide much-needed space for startups and fast-growing companies, as well as various components of U of T’s innovation and entrepreneurship network.

Since the days of Harold Innis and Marshall McLuhan, U of T has developed a rich tradition of scholarship at the intersections of technology, culture and society. With renowned strengths in philosophy, ethics, law, social sciences, medicine, biomedical engineering, artificial intelligence, advanced materials, cybersecurity, fintech, cleantech and many other fields, U of T is one of the few institutions worldwide with the requisite breadth and depth to study the immense implications of modern technology, as well as how society shapes technological advances and how those technologies shape society. 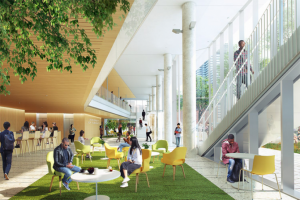 The university will appoint a director to lead the Institute. The director will hold the Schwartz Reisman Chair in Technology and Society and lead the development of programming and research initiatives. New fellowships and a research fund will help attract top minds to the Institute and encourage interdisciplinary collaboration.

The Schwartz Reisman Institute for Technology and Society will also mount a steady calendar of activities – including a major international conference, high-profile speaker events and various workshops and seminars – to share its knowledge and insights with academia, industry, entrepreneurs, policymakers and the broader public.

“The impact of technology on individuals and on society more generally is not well understood,” says Gillian Hadfield, professor of law and professor of strategic management. “The Schwartz Reisman Institute for Technology and Society will allow us to explore important topical issues such as the laws around digital surveillance and the use of autonomous weapons or how the cognitive abilities of artificially intelligent systems will impact human beings.”

Amplifying U of T’s position in Canada and the world

The University of Toronto is Canada’s leading university and consistently ranked among the top universities worldwide. U of T is also recognized as a leading engine for innovation and entrepreneurship. The U of T community of entrepreneurs has created more than 500 companies, and the university’s innovation network is among the world’s top five university-based incubators.

The university also ranks in the top three for research output along with Harvard and Stanford universities. World-class strengths in fields such as biomedicine, computer science, law and philosophy make U of T the ideal place to study the effects of technology and society on one another.

“The Schwartz Reisman Innovation Centre will help U of T faculty and student entrepreneurs reimagine industries and contribute to Canada’s social and economic success,” says Vivek Goel, vice-president of research and innovation.

“This gift from Gerald Schwartz and Heather Reisman is visionary in its scope,” saysDavid Palmer, vice-president, advancement. “Two of the country’s most successful entrepreneurs are helping us build  a facility that will support the next generation of Canadian entrepreneurs and ensure Canada’s global leadership in the responsible use of technology. The impact on our city, economy and society will be profound.”

Gerald Schwartz and Heather Reisman: “We’re immensely proud and excited to be part of an initiative that will further spark innovation, anchor talent and ideas in Canada, and illuminate the importance of socially responsible technology” (photo by Nick Iwanyshyn)