Telus Corp., BlackBerry Ltd. and two Ottawa-based partners are looking for a select number of innovative early-stage Canadian companies that can tap into the growing demand for “internet of things” technology. 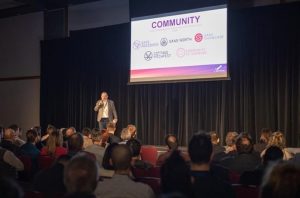 Leo Lax, executive managing director of L-Spark speaks at a SaaS Showcase event in Ottawa in this undated handout photo. Telus Corp., BlackBerry Ltd. and two Ottawa-based partners are looking for a select number of innovative early-stage Canadian companies that can tap into the growing demand for “internet of things” technology. THE CANADIAN PRESS/HO, L-Spark

The internet of things, or IoT, can include consumer devices such as wearable fitness trackers or industrial applications such as vast arrays of sensors that monitor anything from highway traffic to agricultural crops.

Telus will provide the main funding for the project, co-ordinated and hosted by an Ottawa-based accelerator called L-Spark. The Vancouver-based telecom company will also provide access to a LTE-M wireless network that’s configured to efficiently connect internet-connected devices.

These devices do not require that much bandwidth

“The networks that have been implemented today, particularly in the wireless area, have been originally designed to carry voice or data or video. But these (IoT) devices do not require that much bandwidth,” L-Spark’s Leo Lax said.

He said the IoT accelerator will give participants a software tool kit and opportunity to create applications, software or products that can do something on the new IoT platform that could not be done before, within four months.

New platform that is being brought to the market.

The four companies chosen to participate in the project, won’t receive any money from the accelerator’s partners.

“They have to be self-sustaining. …They are investing their time and effort in order to build new capabilities that would not be possible without engaging with this new platform that is being brought to the market.”

The entrepreneurs chosen for the project will also have access to business mentors and technical expertise from BlackBerry of Waterloo, Ont. and Ottawa-based Solace, in addition to Telus and L-Spark. The accelerator partners expect to visit Waterloo, Toronto, Montreal, Fredericton, Calgary, Edmonton and Vancouver in coming months as part of their selection process. Lax said that a typical startup, acting alone, would require three to five years to get a prototype product or service ready for the world to see.

“If the accelerator is doing its job right, you can do it in six months to a year for the same journey.”

Telus chief technology officer Ibrahim Gedeon wasn’t available Wednesday but said in a statement that the company wants to foster “a thriving and secure IoT ecosystem in Canada” that can address a domestic or global market. Lax estimates the CEOs of the four startup companies will be in their mid-30s or older, given the skills required, and they’ll have teams of five to 15 people or larger, and three to five years or more as a business. The accelerator partners are open to applications from all over Canada but they will narrow the field to 10 or 15 before selecting the final four participants.

“Success will be if three out of the four companies are able to be able to build a product on top of this platform, and successfully demonstrate it. If all four of them do it, I think we’re walking on water.”