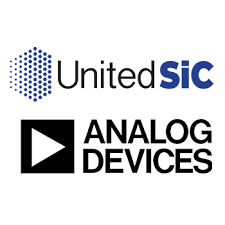 “From our first meeting with the ADI Power team, they instantly understood the value of our SiC technology and the ease with which the devices could be scaled and utilized in their power platforms.  This is a terrific time to bring such a high caliber leader like ADI on as a shareholder,” says Chris Dries, president and CEO at UnitedSiC.

UnitedSiC and ADI have been collaborating on SiC-based products and devices for more than two years.  As wide bandgap power devices, and SiC in particular, become more mainstream and cost effective, the inclusion of these devices should further strengthen ADI’s analog power portfolio.

Steve Pietkiewicz, senior VP of power products at ADI says, “For the last few years, we have been actively following the development and progress of silicon carbide technology and devices. We found UnitedSiC’s FET technology to be ideally suited for ADI’s high performance power platforms and our pursuit of additional high voltage applications.”