Sidewalk Labs is plotting to expand its proposal for a high-tech Toronto community by funding transit and underground infrastructure and trying to snatch up a portion of development fees and property taxes typically funneled towards the city. 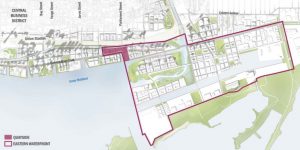 The Alphabet Inc.-backed company looking to develop a swath of the Port Lands known as Quayside in partnership with Waterfront Toronto revealed late Thursday that in exchange for funding a light rail transit line along the waterfront, the organization hopes to receive some of the profits generated from development charges and increased land value.

The company says the arrangement will allow transit to be built “years, if not decades, sooner than it would otherwise,” though Sidewalk plans to pass off the operation of the transit line to a public agency.

Lack of information around the project

The proposal is the latest in a string of controversial plans that Sidewalk has put forward, following months of facing criticism for providing a lack of information around the project, not committing to strict enough data collection policies and not addressing questions around the ownership of intellectual property.

A series of documents released by the company say it aims to “limit Sidewalk’s role to the minimum amount necessary needed for the project to achieve its objectives to the fullest, and ensure third-party participation_ particularly in real estate development.” The documents map out how the company intends to be involved with building, mobility, technology and sustainability in the area surrounding Quayside.

In an email to The Canadian Press, Sidewalk spokeswoman Keerthana Rang said the company does not intend to develop the entire eastern waterfront. Instead, she said Sidewalk will develop about 15 per cent, leaving the rest to be developed “just like any other neighbourhood in the city.”

It has yet to name any partners for the project

However, Sidewalk is proposing incremental value be split in a “TBD negotiated proportion between government parties and Sidewalk Labs” when public land is sold to third-party developers. Sidewalk previously told The Canadian Press it hopes to find partners to develop the project with, but if the risks and needs associated with the project are too high for partners, it says it will take on developing the community and technologies itself.

It has yet to name any partners for the project. However, Sidewalk has shared that it hopes to move Google’s Canadian headquarters to the western side of nearby Villiers Island, building a 185,806 square metre (two million square feet) campus to accommodate a “significant increase of Google jobs” over the next 10 years.

It also envisions jobs will come from an Ontario factory it plans to resurrect to supply tall timber for the community’s construction. It estimates the factory will bring 4,000 new manufacturing, saw mill, logging and transportation positions. In a bid to provide affordable living options, Sidewalk also revealed it will build 2,500 units of housing in Quayside alone, 40 per cent of which would be below market value and 50 per cent of which would be rental apartments. Sidewalk has previously teased plans to deck out the community with “raincoats for buildings” that can easily transition structures from being ideal for sun and rain and heated and illuminated roadways to eliminate snow and ice in winter.