Sidewalk Labs’s chief executive officer says it’s too “premature” to abandon any ideas it unveiled Thursday for a high-tech Toronto community it hopes to build, despite the concepts being met with fierce criticism. 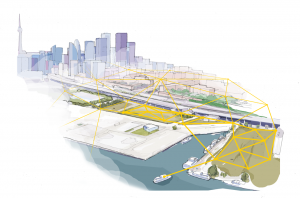 In an interview with The Canadian Press, Daniel Doctoroff indicated his Alphabet-backed company was open to tweaking ideas _including funding a waterfront light rail transit line and underground infrastructure in exchange for a portion of development fees and property taxes typically funnelled towards the city _ for a swath of the waterfront it hopes to develop and calls Quayside.

“Inevitably we are going to be adjusting things as we move forward. We have never said it is our way or this doesn’t work for us,” Doctoroff said. “We have adjusted significantly and we will continue to do that.”

Doctoroff said infrastructure Sidewalk is considering funding “would otherwise be infinanceable” and added “if we are prepared to do that when no one else is, we need to get paid back.” Documents that Sidewalk made public this week show the company touting its idea as a way to get light rail transit line along the waterfront built “years, if not decades, sooner than it would otherwise,” though Sidewalk plans to pass off the operation of the transit line to a public agency.

The same documents show Sidewalk intends to provide that infrastructure to a waterfront area bigger than but surrounding Quayside. In an email to The Canadian Press, Sidewalk spokeswoman Keerthana Rang said the company does not intend to develop the entire eastern waterfront. Instead, she said Sidewalk will develop about 15 per cent, leaving the rest to be developed “just like any other neighbourhood in the city.”

However, Sidewalk is proposing incremental value be split in a “TBD negotiated proportion between government parties and Sidewalk Labs” when public land is sold to third-party developers. An Ontario government source told The Canadian Press the government was unaware Sidewalk Labs had such hopes and said the size of the proposal was “concerning.”

Gov’t continues to have concerns surrounding both privacy and data

The source, who spoke on the condition of anonymity, said the government “continues to have concerns surrounding both privacy and data that comes with this proposal” and confided that “As it is written, there is no way our government would sign off on that plan.” However, the source said it was likely too soon for the province to begin looking for proposals from others for the coveted waterfront property. Doctoroff acknowledged the concepts were facing criticism, but said that sort of response is “predictable” for any new ideas.

“It isn’t fully baked and people just naturally are afraid of new things,” he said. “The best thing we can do is sit down with them and explain and we will be thoughtful and patient and listen to people’s concerns and hopefully reach a place where we have a mutually acceptable way of moving forward that doesn’t have to be what we suggested.”

The ideas Sidewalk revealed added to mounting criticism Sidewalk has long faced for not providing fullsome information around the project, not committing to strict enough data collection policies and not addressing questions around the ownership of intellectual property. In an email to The Canadian Press, Jim Balsillie, the founder of the Centre for International Governance Innovation, called the project “a poorly disguised urban data front for Google” and criticized the company for its secretive tactics that involved it secretively pushing for funds usually funnelled to the city, until its proposal was leaked to media on Thursday.

“We have a vendor trying to become the government and devising one set of plans for closed-door meetings with policymakers and another set for the public,” he wrote. “I remain deeply disappointed with government officials and Waterfront Toronto who, rather than looking after the public interest, have engaged in this anti-democratic charade for almost two years.”

Toronto Mayor John Tory did not respond to questions The Canadian Press sent him about whether he would support Sidewalk’s proposal, but said in a media release, the city has not received a formal proposal yet and any it does receive will face public scrutiny and consideration from the city and Waterfront Toronto. Waterfront Toronto said in a statement that “While preliminary plan concepts from Sidewalk Labs have been shared with us, we have not received a full proposal that includes an underlying business plan.”

It vowed to seek public input on future proposals. Sidewalk previously told The Canadian Press it hopes to find partners to develop the project with, but if the risks and needs associated with the project are too high for partners, it says it will take on developing the community and technologies itself. It has yet to name any partners for the project.

On Friday it also shared that it hopes to move Google’s Canadian headquarters to the western side of nearby Villiers Island, building a 185,806 square metre (two million square feet) campus to accommodate a “significant increase of Google jobs” over the next 10 years. It also envisions 4,000 new manufacturing, saw mill, logging and transportation jobs will come from an Ontario factory it plans to resurrect to supply tall timber for the community’s construction.