IDTechEx Research forecasts that it will reach $ 15.5 billion by 2029

Compared with keyboards and mouses, touch is considered as a natural interaction. Apart from touch, audio and vision modalities can also provided new ways of interactions.

It is hands-free, eyes-free and keyboard-free

Speech enables a convenient integration. It is hands-free, eyes-free and keyboard-free. As talking is natural for most of us and it does not require us to learn new skills, the learning curve is low. Human can speak 150 words on average per minute compared with 40 when typing. Speech interaction can be quickly mastered by young generations, old people, disabled people and illiterate people. It can also be applied in occasions and devices where common interactions are challenging such as while driving, without light, or in extremely small wearables. These advantages make speech an increasingly popular media for devices and applications.

Giants such as Apple, Amazon, IBM, Google and Microsoft, all have efforts on smart speech. Besides the “ear”, it is also vital for the machines to have the “brain”, “mouth” and other organs to realize natural language speech interactions. In this process, emerging technologies and business models are established.

Speech is language-dependent, making the global market more complicated and segmented. However, the general focus of global market is English-centric interactions, with a few popular language systems developed by local players due to their strengths in language data.

The report from IDTechEx Research provides an introduction of different technologies from both hardware and software point of view from the scratch. They are listed as following: 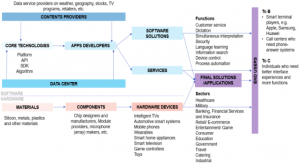 Market landscape, business models and value chains are analyzed in the report, with a ten-year market forecast in the angle of revenue model and applications for the following sectors: