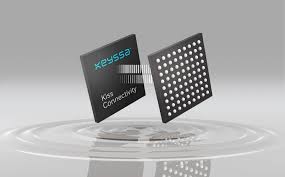 Unlike almost every other aspect of mobile and computer hardware design, the connector has remained undisrupted for decades which has put a limit on innovations within application designs. EMI, RFI, and ESD design issues with connectors have only gotten worse as communication speeds have increased, managing protocols and signals both internally and externally has become more challenging, devices have gotten smaller, and too many protocol connections limit system scalability and grows the overall cost. Mechanical connectors cannot scale with increasing processor and memory performance, to address the source of I/O shortcomings and solve the fundamental issue of I/O inefficiencies.”

Keyssa is making available its VPIO architecture to system architects, SoCs, processors, and system partners. VPIO has been designed to take in low- and high-speed signals from any protocol and aggregate them into one virtual channel over a “virtual pipe,” transmit the aggregated signals to their destination and disaggregate on the other side. The separate pads, pins, and PHYs required for specific protocols can now be combined into one pipe and transmitted over one or more standard SerDes or Keyssa RF link, which increases overall system performance and decreases cost.

“Every chip and system designer struggles with an immutable fact: there is no Moore’s Law for pins,” says Ajay Bhatt, former chief I/O architect for Intel and co-architect, VPIO, Keyssa. “And with the myriad of low- and high-speed legacy protocols that exist in every processor and every system, I/O cannot scale with processor and memory performance. VPIO provides a viable and effective way for I/O to scale by replacing pads with gates, providing both I/O flexibility and scalability.”

KSS104M in Mass Production; Enabled Products to be Launched in 2019

The KSS104M, the latest in Keyssa’s Kiss Connectivity solutions and the only solid-state contactless connector on the market, is now in mass production. The KSS104M is a tiny, low-cost, low-power, solid-state electromagnetic connector that enables large amounts of data to be securely transferred between devices at very high speeds. The KSS104M can be easily integrated into customers’ end products without requiring any changes to their software or firmware, by supporting industry standard high-speed data and video protocols.

Keyssa’s solid-state connectors have been designed into products in different market segments slated to be launched in 2019, including mobile phones, displays, automotive applications, robotic surgery, factory automation, and data center applications. One such application, which will be shown on the floor of CES 2019, uses a matrix of Keyssa’s Kiss Connectors to drive 96 gigabits per second of video data wirelessly from a video processing unit to an 8K panel, enabling the world’s thinnest UHDTV.