The partnership with Mohawk College of Applied Arts and Technology will establish an Interactive Digital Center located on Fennell campus in Hamilton, further developing the region’s AVR and digital infrastructure and education

EON Reality Inc., global player in augmented and virtual reality-based knowledge transfer for industry and education, has partnered with Mohawk College of Applied Arts and Technology, to establish an Interactive Digital Center (IDC) in Hamilton ON. 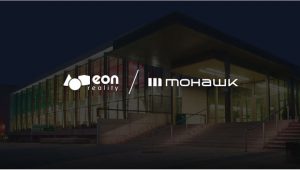 The IDC will build on the growing technology and Virtual Reality community in Ontario and help position Mohawk College as a leading location for AVR development and education in North America.

“Partnering with Mohawk College to open this new Interactive Digital Center is a great way for us to bring Augmented and Virtual Reality technology to Canada,” said Dan Lejerskar, Founder of EON Reality. “By educating people about the AVR Platform, we can help bring Mohawk College to the forefront of all of the academic institutions in one of the most technologically advanced areas on the planet.”

Students can specialize in Virtual Reality and Augmented Reality development

As a part of EON Reality’s entry into Canada, Mohawk College will host the IDC’s VR Innovation Academy where their own virtual reality and other advanced technology students can specialize in Virtual Reality and Augmented Reality development, coding, modeling, and animation with a focus on industrial, medical, and educational uses. The students will gain access to the test facilities, which will be established as part of EON Reality’s IDC, and will learn from EON Reality’s expert AR and VR teachers. The first course will open in January 2019.

Along with building up the AR and VR skills of Mohawk College’s top students, EON Reality’s new IDC will provide a boost to the digital ecosystem already growing and established within Ontario. With the Toronto-Waterloo technology corridor already considered the Silicon Valley of Canada, adding the new facility to Mohawk College’s location in Hamilton — approximately 60 kilometers southwest of Toronto — will help to expand the industry into the AVR space as well.

“Mohawk College is proud to open our new Interactive Digital Centre in an exclusive collaboration with global leader EON Reality,” said Mohawk College’s President, Ron McKerlie. “Our centre in Hamilton will serve as a provincial hub for innovation, training and applied research solutions in Augmented and Virtual Reality for industry partners.”