The incredible power of artificial intelligence is awe-inspiring.  Not long ago, AI seemed like some form of science fiction. Today it is our reality. “It  is becoming a true general purpose technology that is quickly evolving into a utility – not unlike electricity – likely to scale across every industry, every sector of our economy, and nearly every aspect of science, society, and culture,” explains New York Times bestselling author Martin Ford in his new book Architects of Intelligence: The Truth about AI from the People Building It. 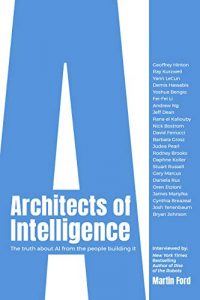 To better understand the many complex issues surrounding AI, Ford interviewed twenty-three of the world’s top research scientists and entrepreneurs – experts whose work is helping to drive the AI revolution. These wide-ranging conversations form the heart of Architects of Intelligence, covering such topics as:

*How will AI evolve and what major innovations are on the horizon?

*Will deep learning continue to dominate, or will other approaches come to the forefront?

*What does the path toward human-level Artificial General Intelligence look like?  How far off is it?

*What are the risks associated with AI, particularly in the areas of security, privacy, bias, the impact on the job market, and potential weaponization.

*Should we really worry about the fears raised by Elon Musk, Stephen Hawking and others: Could AI someday pose a genuine existential threat to humanity?

In his introduction, Martin Ford points out that there was no broad-based consensus among the people with whom he spoke.  They provided varied, and often sharply conflicting insights, opinions and predictions.  For example, Ford spoke with Andrew Ng, Geoffrey Hinton, Yann LeCun, and Yoshua Bengio, pioneers of deep learning – the technology that so far has powered the AI revolution.  He also interviewed scientists who acknowledge the importance of deep learning, but argue that it’s just “one tool in the AI toolbox” including Barbara Grosz and IBM Watson group leader David Ferrucci who have focused heavily on understanding natural language.  Ray Kurzweil, who is well known for his predictions regarding the coming “Singularity” and Demis Hassabis, the CEO of Google DeepMind, also offered many important insights on the future of AI.

In the end, Architects of Intelligence provides a fascinating collection of perspectives about one of the most potent technologies ever created. As Martin Ford points out, “The message should be clear: Artificial Intelligence is a wide open field . . . (Its) combination of massive potential disruption together with fundamental uncertainty makes it especially imperative that we begin to engage in a meaningful and inclusive conversation about the future . . . I hope this book will make a contribution to the discussion.”

The full list of people interviewed in Architects of Intelligence includes:

Oren Etzioni, CEO of the Allen Institute for Artificial Intelligence