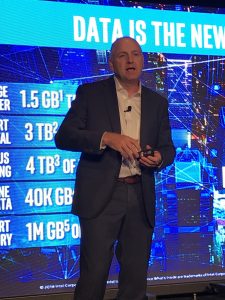 Global computing chip behemoth Intel, has opened an engineering lab in Toronto specifically for designing graphics processing units (GPUs). Occupying two floors of the firm’s North York (Toronto) facility, Intel’s overarching goal is to working towards a proprietary GPU by 2020.As a result of its decision, Intel has begun its hiring process seeking to fill such positions as hardware designers with a background in chip development all the way to those with low-level coding experience, and all resources that revolve around artificial intelligence (AI), according to Denis Gaudreault, country manager at Intel Canada Ltd.

Gaudreault says Toronto was selected due to its talent rich pool that has developed over the years around the various disciplines of chip development. Intel is not the first graphics processing giant to expand operations in Toronto. The city also houses two key players in the GPU market, including Advanced Micro Devices and Nvidia Corp, which have both been developing standalone graphics processing chips for years.

“The kinds of things you can expect to see in the near future are multi-packaged microprocessors that can operate as a CPU and GPU and FPGA – all in the same socket package,” Gaudreault enthused during a recent visit to Toronto for Intel Experience Day – where top executives discussed how Intel is powering Canada through 5G, VR, AI, IOT among other areas.

The Toronto-based engineers that join the team can expect to work in concert with fellow Intel designers working from the firm’s Hillsboro Oregon and Folsom California labs, according to Gaudreault.

“This underscores the importance of a worldwide chase or hunt for talent in these specific disciplines. It is hard to find these people,” he adds.