Launches campaign to outline exciting opportunities for Canada in space

Canada’s current leadership role in space and potential involvement in the growing space economy depends on a commitment from the Government of Canada for a new space strategy. A coalition of organizations from Canada’s space sector is launching a campaign to inform Canadians about what’s at stake. 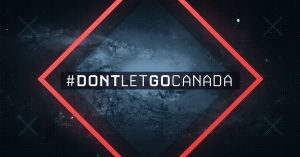 #DontLetGoCanada will raise awareness of Canada’s accomplishments in space; the major benefits to Canada and Canadians that stem from investments in space; the important contributions of the space industry to Canada’s economy and innovation ecosystem; and the exciting opportunities of the new space economy.

“Many Canadians don’t realize how much of a leader Canada is in space today, and how big a role space plays in making their daily lives better,” said Mike Greenley, Group President of MDA, and one of the coalition partners. “This campaign is about making sure Canadians understand that our country is at a decision point. It’s time to secure Canada’s place in space. We believe that the current Government, with its focus on innovation and positioning Canada for future competitiveness, has the vision and wisdom to do it.”

“Canada has had a long and distinguished history of space innovation and investment leadership globally”, said Aerospace Industry Association of Canada President & CEO Jim Quick. “Space has the potential to be an economic, technological and industrial powerhouse that, can deliver significant and sustainable benefits for Canada well into the future. We hope this campaign will help stimulate the urgent and decisive action needed to retain Canadian space competitiveness and participation in the international space community in both the short and in the long term.”

Ewan Reid, President of Mission Control Space Services, another coalition partner, said Canada’s pride in its space involvement is well earned, but that having these opportunities comes with an expectation of continued involvement and investment in the sector. “Canada was the third country in space, with the launch of Alouette 1 in 1962. The country has continued to lead in a variety of space endeavours, including having eight astronauts take part in sixteen missions dating back to 1984, but after David Saint-Jacques’ mission launching later this year the future is uncertain for the rest of our astronaut core,” he added.

Quick added that other countries are positioning themselves to take advantage of the emerging space economy, and that Canada risks being left behind without a funded space strategy and a deliberate decision to be a leading spacefaring nation once again. “The current space-related global market opportunity is commonly estimated to be $500 billion Canadian, which analysts forecast will grow to be a multi-trillion-dollar market in coming decades.”

Canada has world-leading expertise in satellite telecommunications, Earth observation, space robotics and sensors, optics and vision systems, and space science instruments and research. Feeding these areas of specialization are capabilities such as advanced manufacturing of space hardware, including satellites and spacecraft subsystems, components, materials, and equipment; the design and construction of complex satellite data processing systems; space and satellite operations and services and related applications and analytics; as well as space systems design and integration.