Digitally savvy Canadians who make up the Google Generation are on the leading edge of a transformation in the health-care system that will see a greater reliance on technology, including how doctors interact with their patients, a survey commissioned by the Canadian Medical Association suggests. The Ipsos survey shows that young adults aged 18 to 34 are frequent users of the health-care system, reporting an average of at least 11 visits to a physician each year, as well as being the most eager adopters of technology to manage their own health. 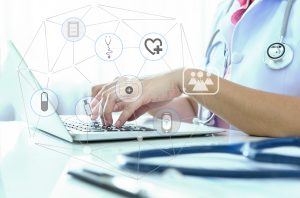 Doctor uses a laptop computer to communicate within the medical online network.

“They have grown up with technology, they’ve grown up using it and hence are more comfortable seeing more technology in the health-care system, more technology use as part of their own personal health care,” said Dr. Gigi Osler, incoming president of the 85,000-member CMA, said from Winnipeg. “They’re about wellness care, not just sick care.”

These young adults are more likely than Canadians in the older age brackets to use wearable technology such as FitBits or to use online apps to monitor their health status – 44 per cent compared to 28 per cent and 14 per cent for the other age groups, respectively.

“They’re looking at how to be better informed about how to stay healthy and if they do get sick, how to get better,” said Philip Edgcumbe, an MD-PhD student at the University of British Columbia and a consultant on technological innovation in health care. “And this is because the whole landscape of health care is changing as a result of the development of the internet and the mobile phone,” Edgcumbe, 29, said from Vancouver.

Overall, seven in 10 respondents said they would take advantage of virtual physician visits, with many believing they would be more convenient as well as leading to more timely and better care. About half of all respondents said they would likely wear a mobile device that would continuously monitor their health, keeping track of such vitals as blood pressure and heart rate, detect the presence of toxins in the environment and create a personal warning system when health measures are out of the normal range.

Roughly 70 per cent agreed that incorporating more technology into personal health care could prevent illnesses and 64 per cent said that given a choice, they would go to a physician who incorporates more technology into their practice. And, while 60 per cent said they were excited about the potential of artificial intelligence (AI) in the delivery of health care, they would only trust a diagnosis if it was provided by a doctor. Despite support for AI and technology in general, roughly two-thirds of respondents were concerned about privacy and protection of personal health data. About the same proportion were worried about the potential loss of human touch and compassion as a result of AI and the digitization of heath-care delivery and the accuracy of diagnoses.

The first two days of that meeting will be dedicated to a health summit, which will include discussions about how to incorporate innovations in technology to improve health- care delivery, said Osler.

“And I see it really as a need for investment and scaling up the health-care technology across Canada, not just little islands and little silos,” she said.