Nevertheless, She Persisted: True Stories of Women Leaders in Tech

It’s common knowledge that the technical world is male-dominated. From the cultural belief that Computer Science is a “subject for boys,” to the assumptions and discrimination women experience in the field, it can be challenging for women at every stage of their careers to thrive in tech. Nevertheless, many high-performing women persist and succeed as leaders despite the gender biases pitted against them. Pratima Rao Gluckman—a female leader in tech herself—embarked on a project to collect stories of the leadership journeys of such women. She wanted to know the details of their stories and how they accomplished their achievements, what influenced them during their childhoods, who their mentors were, and what successes and failures they experienced along the way. 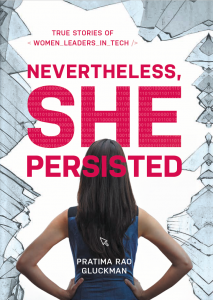 These stories and more inspired Gluckman to write Nevertheless, She Persisted: True Stories of Women Leaders in Tech for which she interviewed 19 female executives about their encounters with bias, their influences and inspirations, and their strategies for success.  The stories are intended to inspire generations of women and help free our society from the limiting belief that ability is somehow linked to gender. Each interview includes a synopsis of the subject’s experience and perspective and ends with bulleted takeaways from the author, as well as her thoughts, reactions, and in-depth insights on important topics such as meritocracy, emotion in the workplace, career interventions, the aggressive label, and more.  Some of the highly successful women we meet include:

“My long term hope for the tech world is to have equal representation of men and women as CEOs, board members, executive leaders, middle managers, and engineers” says Pratima. “I hope that by telling these women’s stories, I will encourage a new generation of women to develop the skills and determination to make equality a reality. Let’s go change the world. If each one of us makes it a point to intervene in one woman’s life, we can get there, slowly but surely— one woman at a time.”

Whether you are a young woman thinking of a career in software, a middle-career or executive woman, a parent, or a man curious about the role gender plays in tech, Nevertheless, She Persisted reveals the secrets, successes, and hidden struggles that women have endured to become both highly accomplished in their technical skills and effective senior leaders in their organizations.

Pratima Rao Gluckman knew she wanted to be an engineer from a young age. When she took her first programming class, she fell in love and began on her career path. She attained a Masters in Computer Science (University of Texas at Arlington), Masters in Chemistry and Bachelors in Instrumentation Engineering (BITs Pilani India). After working in the industry as a software engineer, she made the decision to move into engineering management. Leading came naturally for her, and currently, in her field of Enterprise Software, she manages a team of engineers.
She currently resides with her husband and three children in the San Francisco Bay Area.