Staff at Enigma Interconnect gather for a group photo.

Enigma Interconnect, a Burnaby BC-based manufacturer of high quality bare printed circuit boards (pcbs), celebrated its 45th anniversary this month with an evening of festivities which focused on the company’s past, present and future.

Throughout the evening, accolades were given to the dedicated, innovative and hardworking Enigma team that brings their extensive knowledge and loyalty to the company’s 250 active customers. Mark Pillon, P.Eng. and president, spoke about Enigma’s traction for sustainability and success.

“Enigma Interconnect has taken significant leaps in pcb manufacturing technology and the services provided to customers. We remain dedicated to strengthening the company’s solid foundation for continued growth,” says Pillon.

The company has grown significantly from its beginnings in 1973 to over 40 employees working in 35,000-sq-ft of manufacturing space in BC. The Enigma team is comprised of nine individuals who bring a combined total of over 286 years of manufacturing service with the company – an impressive 29 year average per person. John Parsons, engineering manager, provided details about how much the processes and technology have evolved at Enigma since, and he acknowledged Keith Herd, who has the longest tenure at the company with over 41-years of service. 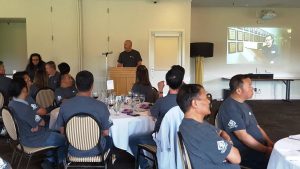 Long-time Enigma customers were delighted to provide congratulations to the company on its 45th anniversary, including: Algo Communications, Northern Airborne Technology, AvtechTyee and Dorigo Systems. Doris Meadley, sales manager, presented Enigma’s corporate highlights which concluded with the expansion of Enigma Interconnect into the East coast of Canada with a sales office in Ottawa headed by Rudy Deochand.