Electrochromic glass is the largest smart glass market today, and it is unlikely to be dethroned any time soon. For those unfamiliar with the technology, in its most common form it transitions from a clear or pale yellow to a vivid and dark blue (a result of the tungsten oxide electrochromic layer, as shown in diagram below), starting at the edges and moving inwards. It blocks light and heat to replace your blinds, and maybe your air conditioning too, but it is expensive. Based on research at IDTechEx, the upfront price is estimated to be between $400 – $800 per sqm, depending on the project size, compared with $300 per sqm for low-emissivity float glass (glass coated with a special layer for energy efficiency). This is attributed to the vacuum deposition process used during its manufacture, which is energy intensive (i.e. it leads to a sizable electricity bill) and ultimately is the reason why I don’t expect my friends to be showing it off at their barbeques this summer. Electrochromic glass 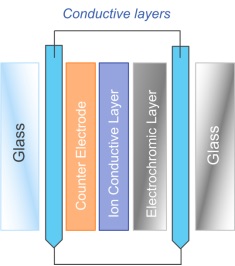 But perhaps another reason you wouldn’t have this in your home is the colour: it’s blue. While market leaders point to health benefits (it simulates daylight, which may improve mental health and productivity), this feels like a marketing afterthought. Indeed, new entrants perhaps affirm this: Kinestral Technologies, a U.S. based start-up backed by AGC, have commercialised a more neutral grey-tinted smart glass that can more readily blend into the building envelope and be granted acceptance from architects in front-facing areas. This might be the key advantage that differentiates the company in a market dominated by only a few (blue) players.

Despite a few faults, the market for electrochromic glass is one that is clearly beginning to take off, and the trend for the increasing size of projects reflects this. For example, a few years ago one of the largest projects from View Inc, an electrochromic provider based in the U.S., was roughly 2500 sqm (Health Care facilities in Toronto Canada), and in 2018 the company is installing around 9200 sqm of glass at the America Center II in San Jose. Customers are becoming increasingly educated on the benefits of this technology, and as a result are willing to pay for the value it adds.