Wearable device shipments slow in Q1 2018 according to IDC

Higher priced smart wearables from the likes of Apple, Fitbit and numerous fashion brands grew 28.4% during the first quarter of 2018, as consumer preferences continued to shift towards smarter devices, according to a wearable devices report from International Data Corp. (IDC). Worldwide shipments of wearable devices grew 1.2% during 1Q18 as shipments reached 25.1 million unit, says the IDC report. Growth for the market was far lower than the 18% year-over-year growth one year ago largely due to the 9.2% decline in shipments of basic wearables. 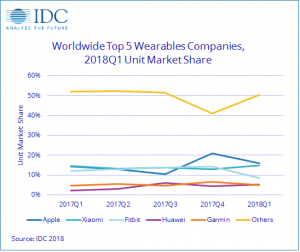 “With the move towards smarter devices, we’re also starting to see hints of where the wearables market is headed,” says Jitesh Ubrani senior research analyst for IDC Mobile Device Trackers. “Additional sensors, years of underlying data, and improved algorithms are allowing pillars of the industry like Fitbit and Apple to help identify diseases and other health irregularities. Meanwhile, roughly one third of all wearables included cellular connectivity this quarter, which has allowed new use-cases to emerge.”

“Beyond the market leaders is a long list of other vendors forging their own path in the wearables market,” addsRamon Llamas, research director for IDC’s Wearables team. “While health and fitness remain the key value proposition behind many of these devices, a closer look reveals hearables that feature coaching, audio modification, and language translation, other wrist-worn devices focusing on personal safety, and connected watches for children.”

Outside of watches and wrist bands, which accounted for 95% of the shipments during the quarter, sensor-laden clothing grew 58.6% year over year. Though the majority of these were step-counting shoes, the list of brands offering shirts, shorts and other clothing items with fitness tracking fuctionality similar to the wearables that have been on the market for years, continues to grow. Some even offer users a discreet way to partake in non-fitness related exercises.

Apple Watch shipments grew 13.5% over the previous year as the launch of a cellular connected Watch entered additional markets. Telcos around the world have rejoiced as the inclusion of cellular has opened another revenue stream. Apple’s growth has also outpaced the entire market allowing the watchmaker to increase its share from 14.3% in 1Q17 to 16.1% in 1Q18.

Xiaomi captured the second position with 14.8% share of unit shipments. However, with the lowest average selling price (ASP) among the top 5 companies, Xiaomi was only able to capture a paltry 1.8% of the dollar value of the market during the quarter. This is an important distinction as Xiaomi has been able to successfully flood the primarily Chinese market with its devices but has been far less successful at capturing share of wallet.

Despite a decline of 28.1%, Fitbit ranked third during the quarter. The launch of the company’s smart watch, Versa, was met with initial success thanks to appealing design and even more appealing price. Recently, the company has also launched new features on its platform, such as female health tracking, which has been well received as over 2 million users have already used this feature. Looking ahead, the company remains focused on the health and wellness market by working with government agencies and medical institutions. However, it’s important to note that these organizations are typically slow to move and therefore Fitbit may not bear the fruits of its labor in the short term.

Utilizing the Honor brand to cater to a younger audience, and the Huawei brand to cater to a more demanding audience, has worked quite well as Huawei managed to capture the fourth position during the quarter. The wide product portfolio of smart watches, kids’ watches, fitness trackers, and even ear-worn devices has allowed the company to more than doubled its share from the previous year. However, the majority of the company’s presence is still limited to Asia.

Garmin rounded out the top five list with 5% share, up slightly from its 4.6% share a year ago. In the past, Garmin has been relatively slow to adopt certain new features though the recent rollout of music playback and further expansion of Garmin Pay and the Connect IQ platform has boded well for the company. Garmin has also been able to slowly expand its global reach as nearly three quarters of its wearable shipments were outside the U.S. in 1Q18, compared to roughly two thirds in the previous year.