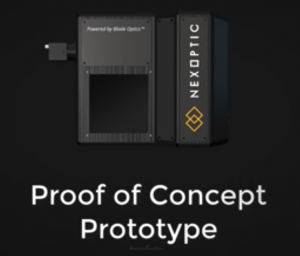 “We are all very encouraged by the results our team has achieved on its first mobile lens demonstration. Imaging capabilities from our desktop testing of the assembled lens system appear to have met our ambitious designtargets,” says Darcy Daugela, P.Eng and Chairman of NexOptic. “If we incorporate industry-standard image processing techniques used in virtually every mobile device, I believe this lens design can provide unprecedented telephoto capabilities for smartphones and many other consumer imaging products.”

The testing was completed upon receiving and assembling the firm’s custom manufactured lenses from Diverse Optics of California and consisted of testing the assembled lens system on a desktop. Bar target test results indicate that the lens provides improved angular resolution when compared to market leading smartphone telephoto lenses, as it was able to resolve two more bar targets (i.e., 25% better angular resolution) on the chart than one of the current, top-rated smartphone lenses.

Initial bar target test results from NexOptic’s benchtop prototype indicate that on-axis resolvable targets (measuring resolution) are nearly identical to simulation values. NexOptic notes that its desktop demonstration was built to prove the engineering and showcase the technology on a preliminary basis and to refine NexOptic’s path to a smartphone-based unit. Off-the-shelf sensor configurations and rudimentary image processing features were used for NexOptic’s initial testing. NexOptic will be engaging an industry-leading, independent third party to test optical resolution, and looks forward to reporting the ongoing progress of its smartphone prototype as the Company continues to work towards completing a functional prototype of this lens system.

NexOptic also reports that, as part of its strategy to protect intellectual property, it continues to file additional patent applications with the United States Patent and Trademark Office (USPTO) in addition to filing in strategically selected, global jurisdictions.

Recent provisional patents filed with the USPTO (including ones specific to and related to the mobile lens stack design) utilize a variety of lens stack designs, all of which differ geometrically from NexOptic’s first patented lens, with which the Company designed and built its original proof-of-concept (please see NexOptic’s news release dated June 29, 2017). NexOptic’s original patent, as issued by the USPTO, is now pending in the following jurisdictions: China, South Korea, Japan, the European Union (including Great Britain) and Canada.

NexOptic continues to expand its Blade Optics™ suite of optical technologies, which it believes will enable much broader and more dynamic marketing strategies for the Company.