ZTE, the fourth largest smartphone vendor in the United States, attempted to create a totally new user experience with its Axon M smartphone. The Axon M features dual-folding screens and a fingerprint sensor on the side of the smartphone. Both features aim to provide the largest screen possible without distractions. ZTE’s attempt via the Axon M represents one of the very few to provide a tablet-like screen experience without growing the phone proportionately in a mass-produced smartphone. 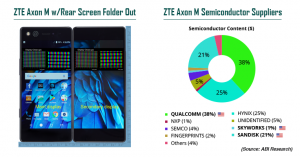 The innovation could be hampered though since this month the U.S. government banned American firms from exporting components directly to ZTE or through a third party for seven years, announced the Teardowns service of ABI Research, a market-foresight advisory firm providing strategic guidance on the most compelling transformative technologies. The ban was implemented because ZTE allegedly shipped telecom equipment to Iran and North Korea.

ZTE’s approach is to provide two full HD resolution (1920×1080) screens: one on the front and one on the back of the smartphone. The rear display is supported by strong hinges that allow it to fold out to reside side-by-side with the front display. “The double sized screen and placement of the fingerprint sensor on the side of the smartphone could have provided a very exceptional experience, but ZTE did not fully capitalize on its creativity,” said Jim Mielke, Vice President of ABI Research’s Teardown service. “Once again we were disappointed to see a total of more than an inch of borders at the top and the bottom of the of each display that had minimal functionality. ZTE did not follow the trend of making the Axon M borderless,” Mielke added. Of the entire 16-centimeter (6.4”), only 13 centimeters (5.2”) is actual display.   The Axon M also shares other another downfall inherent with a dual display: the power draw is more than twice as much when both displays are active (2500mW vs 1000mW).

“A second version of the Axon M could have been very interesting if ZTE worked on just a few of the shortcomings of the first,” Mielke added. But the U.S. sanctions will prohibit a quick release of a second version. Although the display itself is not from the United States, the protective glass (Corning Gorilla Glass 5) and 60% of the other electronics are sourced from U.S. companies: Qualcomm, SanDisk, and Skyworks Solutions.

“The ban on Qualcomm chips is not great for ZTE‘s supply chain, but since ZTE also uses MediaTek and Spreadtrum Communications chipsets in its smartphone portfolio, it may not be too problematic,” said David McQueen, Research Director for Handsets and Devices at ABI Research. “The most crucial aspect of the ban may be ZTE not being allowed to use Qualcomm, Qorvo, Skyworks, or Avago Technologies for front-end components as well as Google and therefore Android for the operating system. ZTE could start to use the Android Open Source Platform instead as some of its Chinese counterparts do already, namely OPPO, Vivo Communication Technology and Xiaomi. But this change will undoubtedly affect its ability to hold on to its U.S. market share, particularly on a platform that generally won’t support Google’s services,” McQueen adds.

There were 1.46 billion total global smartphone shipments for 2017. Of those, ZTE shipped 42.8 million. “ZTE will have difficulty reaching that same number during the next seven years,” concluded McQueen.