During a company kickoff event for employees attending the annual TTI sales leadership conference, a special dedication ceremony took place to unveil the name of TTI’s newly constructed distribution center. Named in honor of the company’s founder and CEO, Paul Andrews, the facility has been crowned the Andrews Distribution Center. 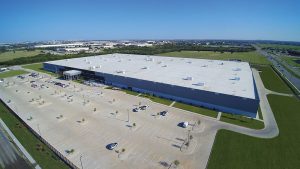 Mike Morton, TTI COO, ushered the guests that included TTI senior leadership, branch managers and many from the local TTI team, to assemble outside the distribution center as he presided over the unveiling ceremony and the name was revealed for the first time.

Andrews thanked the attentive crowd and acknowledged the accomplishments, dedication, and hard work over the years that lead to the proud moment.

The 800,000 square-foot distribution center expands the company’s cumulative warehouse capacity to more than two million square feet globally. The Andrews Distribution Center is located near the company’s global headquarters in Fort Worth TX.