Artifical Intelligence (AI) designs represented the majority of submitted start-up projects as the submission period closed for this year’s ‘Global Olympics of Innovation’. With a 17% rise in submissions overall to this year’s competition, a total of 236 out of 1460 global projects fit into the AI category, according to the organizing group that includes the Municipality of Shenzhen and the People’s Republic of China. 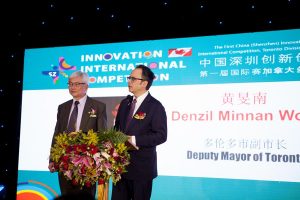 Final 2018 tally of entries globally in each country:

Initiated by the Municipality of Shenzhen, the competition is sponsored globally by local governments in Toronto, Silicon Valley, Sydney, Tokyo, Boston, Tel Aviv, London, Stockholm and Berlin. The Second China (Shenzhen) Innovation & Entrepreneurship International Competition will offer increased prize awards totaling CAD$2.09-million. A venture capital pool of CAD$4-billion has been set up by 34 investment institutions for all the nine divisions, which helps support outstanding projects.

This year the Sci Innovation Competition (Canada) is partnering with Toronto-based MaRS Discovery District, one of the world’s largest urban innovation hubs supporting innovators and entrepreneurs. The partnership will see MaRS host the competition at their downtown Toronto facility and promote the competition to their network of stakeholders, startups, and communication channels. MaRS will also play a part in recommending judges that include business leaders, scientists, academics, renowned experts in technology and innovation, who will be tasked to assess and award the competitors.

As the Competition Division for Toronto, the 2018 Sci Innovation Competition will now vet the 208 submissions in order to select the 20 finalists from Canada that will be featured and pitch ideas to a panel of high profile judges and First, Second, and Third place prizes will be awarded. 10 of them will be qualified for the ‘Industrial Finals’ and ‘Grande Finals’ of the Second China (Shenzhen) Innovation & Entrepreneurship International Competition in Shenzhen in April 2018.

Driving the engagement with some of the Canadian ‘Tech Hubs’ and building new relationships for the competition is the Pacific Innovation & Executive Club Toronto (PIEC), which also has been instrumental in bolstering this year’s registration for the competition. PIEC Toronto is a membership-based not-for-profit organization with a mission to service and facilitate China-Canada cross-border interactions and collaborations across industries.

There are several highlights of the 2018 Sci Innovation Competition. The competition has involved more professional partners that include prominent Canadian universities, such as the University of Toronto, University of Waterloo, and Western University. Other famous Canadian innovation institutions like OCE (Ontario Centre for Excellence), and Chinese VC institutions such as Cowin, Green Pine Capital, Midday Capital are onboard. Secondly, there will be a larger VC pool of around CAD$4-billion for the global competition, which is about 30 times than the previous competition.