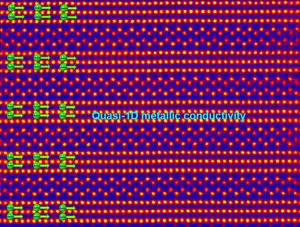 The scanning transmission electron micrograph shows that the atomic structure was
alternately arranged in the three-layer and the zig-zag two-layer thick chain-like slabs,
showing quasi-1D metallic conductivity in the former.
Copyright : Chunlin Chen

Sheets of electrons that are highly mobile in only two dimensions, known as 2D electron gas, have unique properties that can be leveraged for faster and novel electronic devices. Researchers have been exploring 2D electron gas, which was only discovered in 2004, to see how it can be used in superconductors, actuators, and electronic memory devices, among others.
The materials are made of strontium, niobium and oxygen atoms, with a layered structure derived from perovskite. These strontium niobate compounds show promise for developing advanced electronics because of their ‘quasi-one-dimensional’ metallic conductivity.