Led by mobile phones, small appliances and wearables, shipments of consumer electronics devices enabled with wireless charging rose 40 percent in 2017, compared to the previous year. In all, nearly 500 million devices with wireless charging shipped last year, according to IHS Markit, a global research and analytics provider. 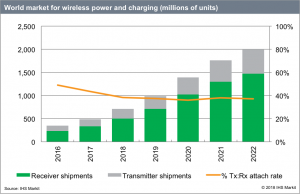 Mobile phones were primarily responsible for the strong growth in wireless power technology in 2017, after Samsung set a precedent with its flagship Galaxy S8 smartphone in April 2017. Apple followed in November 2017, adding the technology to its new iPhone devices, including the iPhone 8 and 8 Plus.

Electric toothbrushes will continue to boost the small appliances category, helping the segment grow to more than 100 million units by 2026. Wireless charging is most efficient for electric toothbrushes, because the toothbrush is always in the stand and no energy is lost during the charge.

The Apple Watch, which has featured a proprietary, low frequency charging solution since its launch in 2015, led wireless charging in the wearable devices category in 2017. Smart watch devices launched by smartphone manufacturers are expected to continue to drive growth in the wearable segment, which is expected to exceed 90 million units shipped in 2022.

Awareness grows around the world, but usage is still relatively low

According to the latest Wireless Power Market Tracker from IHS Markit, consumer awareness of wireless charging technology exceeded 80 percent in all regions. Awareness is expected to increase in 2018, thanks to Apple’s support of the technology. However, the number of respondents reporting they had actually used wireless charging technology was still relatively low, averaging only 29 percent across all regions in 2017.

The IHS Markit Wireless Power Market Tracker provides a full view of all the various applications in the market in a single database, including consumer, medical, industrial, automotive and public deployments. Dedicated market research and interviews with more than 50 companies within the industry help shape detailed market forecasts by application, while an in-depth consumer survey provides insights from end users from a different region each quarter.