Dealing with EMC filtering in today’s electric and hybrid vehicles

Automobiles have changed significantly over the past 40 years from mechanical systems to computerized systems. As a result there is an increased need for electromagnetic compatibility (EMC) filters in today’s electric and hybrid vehicles, also called e-vehicles. 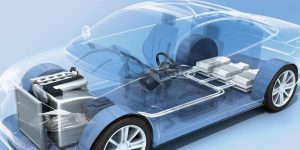 40 years ago in the mid-1970s, there were few, if any, computers or electronics in vehicles aside from the car radio. Prior to this time, engines had simple, mechanical designs and circuitry was too large to be practical for automobiles. However, the gas crisis in the late 1970s led automotive manufacturers to include solid state circuitry to control ignition timing, particularly as smaller engines became the norm. About 30 years ago in the 1980s, microchips were used as part of the creation of fuel injection and for other emissions system controls. As the 1990s came, on-board computing became the norm and these systems began to control more and more functions of vehicles. Around this time, most automobiles became too complex for the average car owner to fix.

Since the early 2000s and throughout the past decade, most automotive manufacturers began to include GPS, entertainment systems, advanced climate control and more as standard features. As a result, electronics and the on-board computer have become an essential performance-determining part of the vehicle. 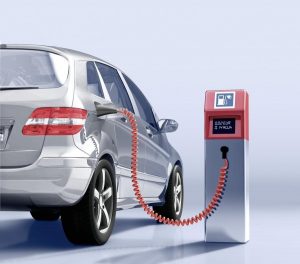 Today’s automotive manufacturers are creating dozens of electric and hybrid vehicles. The difference between yesterday’s combustion vehicles with basic electronics and simple on-board computers, and today’s fully computerized electric vehicles is an important one: Computers now control every aspect of an electrical vehicle.

Without on-board computing systems the vehicle won’t operate. With good on-board computing systems the vehicle’s passengers are safe.  They provide not only for the safety, comfort, and convenience of passengers, but they also power the electrical drive systems, high-voltage batteries, inverters, and at least one electric motor.

As a result, there are potentially hundreds of things that can go wrong with e-vehicles and their computing systems. Electromagnetic interference (EMI) and the physical damage caused it can cause is one of the biggest. EMC components and filters help maintain the correct operation of the automotive communication networks and all the different equipment in common electromagnetic environments. And, EMC requirements are regulated by international standards such as CISPR 25 or the EU Directive ECE-R10. 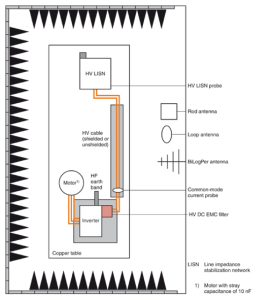 Measurement setup according to CISPR 2

As a result, the biggest priority when developing e-vehicles is to ensure that the individual systems, crammed into very restricted spaces, do not cause mutual interference. Because of the unique design of electric vehicles design engineers must use electronic components that are able to withstand vibration, impact, and wide temperature ranges while reducing electromagnetic interference, voltage spikes and ground currents. It is critical for design engineers to ensure that no interference affects systems outside the vehicle.

Batteries and inverters are one of the first places to look for EMC problems. Inverters operate with pulse-width-modulation control of the motor. The sharp edges of these pulses can cause EMC issues for both the input and output sides of the inverters. This most often manifests as both conducted and radiated emissions which can be minimized through a complete encapsulation or shielding.

Without a combustible engine, and with space constraints due to batteries and computing systems, designers must distribute weight and drive components throughout the vehicle. Most often the battery is situated in the back of the vehicle while the inverter is in the front. Motors are typically installed as close to the wheels as possible – either on the axles or in many cases directly on the wheels. As a result, the connection of the inverter and battery has to be made by a long shielded cable. This poses great EMC risk for three main reasons:

The best solution for design engineers to use in dealing with these EMC issues is to design the system with high-voltage DC filters. As a company, this is something that we realized and why we were the first to develop a family of 2-line high-voltage DC EMC filters for electric vehicles. DC filters used in hybrid and electric vehicles should be designed for a maximum voltage of 600 V DC, which correlates to the standard voltages of high voltage batteries.

Next, the EMC filters must offer a very low DC resistance to avoid significant losses. As a result, they should filter drive systems with power ratings in excess of 100 kW, and their current capabilities should cover the range of up to around 150 A DC or 350 A DC. 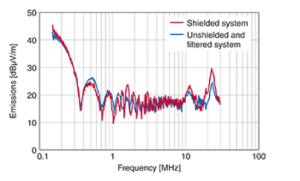 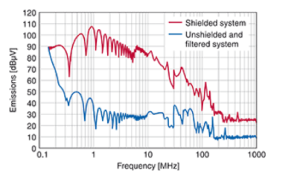 Emissions when using a high-voltage DC filter from EPCOS. By using these EMC filters between the battery and inverter, conducted interference was dramatically reduced despite using an unshielded cable

By doing this, the conducted interference could be reduced by up to 70 dB, or a factor of 3,000 – even when using an unshielded cable. In fact, by using EMC filters engineers can eliminate the need for shielded cables to save on weight, weight distribution and space. Of course, this EMC performance should be tested and confirmed in a test setup with the EMC filter in place.\

The use of such 2-line high-voltage DC EMC filters in electric vehicles enables a considerable reduction in the number of conventional EMC measures in the individual system components. Moreover, by using such filters, as we’ve discussed, engineers can get back much-needed space and weight for tomorrow’s even more advanced on-board computing systems.