A brand-new data centre, described as a stand-alone and purpose-built, has officially opened in downtown Montreal. Made possible by a partnership between Urbacon and Fonds immobilier de solidarité FTQ, the new Downtown Montreal Data Centre cost more than $70 million. 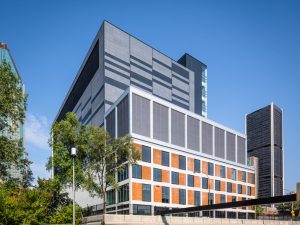 The next generation project is located at 544 Rue de l’Inspecteur, in the Griffintown borough, near Montreal’s financial district. The 266,000-suare-foot facility is the city’s largest and most secure data centre in its category. The location serves as a global telecom node, providing close proximity to major US cities. Prime connectivity, advantageous climate and favourable hydro rates are other benefits of locating to Quebec.

“Quebec’s colder climate and affordable power has led to a recent boom in data centre development, responding to increased global demands for data storage. With the completion of our new facility, Montreal now has a centralized flagship data centre similar to other major metropolitan centres like Toronto, New York, Los Angeles and Miami. We can now offer a world-class facility that meets the highest standards in terms of structural aspects, security, mechanical and electrical systems for a leading edge data centre.”  Peter Russell, vice-president, Properties and Development Management, Urbacon

The facility itself is well served by air, rail and road links, has access to a highly-educated ICT staff and has all the features one would expect of a cutting-edge technological facility. With seven dedicated data floors, a total critical power of 30MW, and an annualized mechanical PUE of 1.2 or better, the facility is the data centre evolved.

“By 2020, we expect the data centre sector to grow from 16% to 28%, in particular, because businesses prefer to outsource to data centres rather than incur the heavy cost of setting up such centres in their own facilities. Benefiting from the expertise of the Urbacon team, which has built a solid reputation in this field over the past 30 years, the new Downtown Montreal Data Centre has a distinctive offering, mainly because of its strategic urban location and the superior quality of its facilities.” Normand Bélanger, president and CEO, Fonds immobilier de solidarité FTQ