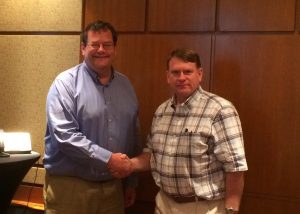 Ownership interests are being pooled and the new company, operating under the TechInsights name, now provides an extensive database of technology intelligence of electronics and especially, of integrated circuits at micro level of detail.

“TechInsights’ ambition is to be the preferred source of technology intelligence and advice for anyone needing that information, whether in support of patent strategies, or to support product development and road-mapping, competitive intelligence, marketing, research and education, or any other needs: scale is critical to achieving that ambition and this combination enables us to double up our value to the market,” says John Day, TechInsights CEO.

The combined company will have the scale and resources to advance the breadth and depth of its offering to the global technology industry and to support owners of technology patents everywhere.  The two companies count 37 of the 50 largest owners of US patents among their clients and this combination will ensure that our clients will have access to the very best advanced technology intelligence and technology-based patent advice.

“TechInsights and Chipworks have long been leaders in the field – and I am privileged to have played a central role in the formation of both companies some 25 years ago,” says Terry Ludlow. “I am delighted that the businesses have now been brought together so that a new business, combining the considerable strengths of both companies, is formed: it means that we will serve our clients at continually higher levels for the next twenty five years.”

TechInsights specializes in reverse engineering and analysis laboratories, staffed by scientists and equipped with patented techniques and sophisticated instruments capable of analyzing state of the art semiconductor, microelectronic and software technologies.