A conference focused on highlighting the importance of connections, academia and the tech community seeking solutions to change the world was held last week at the University of Toronto Mississauga (UTM). 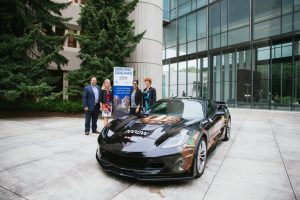 In the first keynote, Scott Kennedy talked about IoT and its relevance in business today. He mentioned how Fortune 500 companies fail because they aren’t jumping at the chance to implement IoT solutions in their business. Scott encouraged companies to enhance the IoT conversation and get a better understanding of the problems their customers are facing. 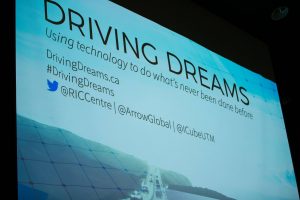 “Technology is the enablement. You need to emotionally connect with your clients and understand their end-to-end supply chain, to understand what their problem is. Only then will you be able to successfully implement personalized IoT solutions that your clients will adopt,” says Scott Kennedy, principal lead for IoT Rogers Professional Services.

One of the panels discussed growing trends in AI, big data, sensors and IoT and involved speakers such as Mohammad Ahmad, senior manager at TE Connectivity, Andrew Hunter, senior director of marketing at Cypress, and Rob Martinez the sales development manager at Intel.

Driving Dreams was also a platform to launch the hackABILITY hackathon hosted by RIC, Arrow Electronics and ICUBE and inspired by Sam Schmidt, a former Indy race car driver and quadriplegic. Thanks to IoT advancements, Sam partnered with Arrow Electronics to build the SAM (Semi-Autonomous Motorcar) that’s allowed him to get on the track once more, just by tilting his head. The SAM car was showcased at the conference, to give attendees a better look at what technology solutions were used. 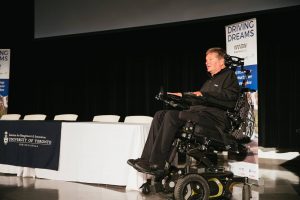 “hackABILITY takes the ‘dis’ out of disability. When you deal with people who have disabilities and you help them to be independent, it changes their situation forever—It empowers them,” says Schmidt.

The motivation behind the hackathon is to raise awareness about opportunities in these fast-emerging areas of technology. hackABILITY also aims to facilitate rapid prototyping of devices that may be considered for further development and commercialization. The evolution of technology continues to push boundaries and encourages new ways of putting things together and hackABIITY is the place to showcase inventions that can change lives.