For the first time ever, physicists from three continents have been able to completely measure and describe the quantum-mechanical wave function of an ionized electron by using attosecond science techniques. 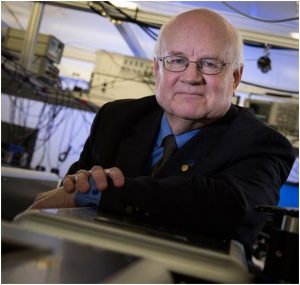 This breakthrough was made by physicists from the National Research Council of Canada (NRC) and the University of Ottawa, the Max-Born Institute for Nonlinear Optics and Short Pulse Spectroscopy in Germany, and Waseda University in Japan.

“Attosecond research is still in its infancy,” says Canadian research lead Dr. David Villeneuve, Research Officer at the NRC and adjunct professor at the University of Ottawa. “It is only because of very recent developments in quantum photonics that experiments of this kind have become possible. Attosecond experiments allow us to view at the quantum level the electrons within atoms and molecules.” 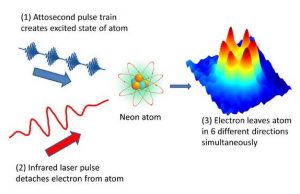 The experiment demonstrates a fundamental property of quantum mechanics. By capturing the first-ever holographic images of the quantum wave function of an electron, the physicists have highlighted the exquisite control of the quantum state of an atom that can be achieved with state-of-the-art attosecond science, and show how attosecond science techniques are currently revolutionizing ultrafast laser physics research.

An attosecond is one quintillionth of a second (1×10-18 of a second), roughly equivalent to the relationship between one second and the age of the universe. Attosecond light pulses can profoundly change the states of matter. Results of this research are published in tomorrow’s edition of the journal Science.