Researchers at the University of Waterloo combined motion sensors with software programs so that people recovering from hip and knee replacements could see how well they were doing their rehabilitative exercises.

Initial results show that the immediate visual feedback the new technology provides makes patients perform better. The system helped patients do their exercises with more control and less cheating. Some patients also increased their range of motion, a key objective of the physiotherapy. In addition to joint replacements, the system has potential applications in rehabilitation for a range of other patients, including stroke victims and people with Parkinson’s disease.

Dana Kulic, a professor of electrical and computer engineering at Waterloo, said the findings suggest the system could help reduce recovery times by increasing the effectiveness of exercises, a hypothesis she hopes to test in a follow-up study as well as looking to confirm a link between visual feedback and better exercise performance. 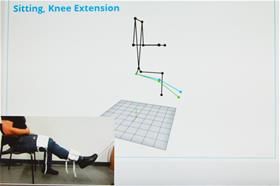 Sensors on a patient (bottom left) translate to visuals on the screen.

“The system we have developed is quite flexible,” said Kulic, who presented a published research paper on the project at the recent Computer-Human Interaction Conference. “It can be used for any type of human movement.”

Sensors attached to limbs, such as just above the knee and the ankle in knee replacement cases, send data to a computer while patients do exercises prescribed by physiotherapists. Using human body modelling and machine learning, software then analyzes that data and, in addition to organizing and storing it, instantly generates a stick-figure visual representation of the motion. The patient’s actual movement is displayed on a computer screen alongside the ideal movement for a given exercise, providing a comparison patients described as both motivating and enjoyable.

“Some even asked if it was possible to buy the system to take it home,” said Kulic.

A key function of the Automated Rehabilitation System is the provision of objective information on patient progress to physiotherapists, who currently rely largely on visual observation and experience to make assessments. Cardon Rehabilitation and Medical Equipment Ltd. of Burlington, Ont., which partnered with Waterloo on the project, is now working to bring the technology to market. The lead researcher was Agnes Lam, a graduate student.