Raspberry Pi achieved this milestone by selling more than 12.5-million boards in five years, emerging past the previous third place holder, the Commodore 64.

Developed in the United Kingdom by the Raspberry Pi Foundation to promote the teaching of basic computer science in schools and in developing countries, the original model became far more popular than anticipated, selling outside of its target market for uses such as robotics. Peripherals (including keyboards, mice and cases) are not included with the Raspberry Pi. Some accessories however have been included in several official and unofficial bundles.

As The MagPipoints out, this puts the Raspberry Pi past Commodore 64 sales, according to some estimates. That would make the Pi the third best-selling “general purpose computer” ever, behind Apple Macintosh and Microsoft Windows PCs. Not bad considering the original plan was to produce between 10 and 20,000 boards. 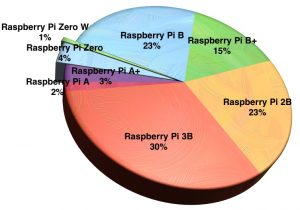 The rest of the sales are between older models. The original Model A accounts for just 2 percent of sales – making it a rare find today.