The latest figures from BC Stats confirm jobs and wages in British Columbia’s technology sector have broken a new record as the province’s technology industry continues to flourish. 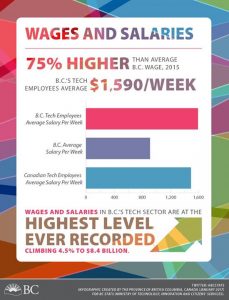 Importance of B.C.’s technology industry to the overall economy

The gross domestic product (GDP) of British Columbia’s tech sector expanded 2.4% in 2015, contributing $14.1 billion to B.C.’s overall economic output. Tech revenue climbed 5% to approximately $26.3 billion – the highest level ever recorded. The new numbers, based on data ending December 2015, highlight the importance of B.C.’s technology industry to the overall economy. Technology is essential today to every business across all sectors, and the stronger the technology sector is, the more competitive business becomes.

“For the fifth year in a row, B.C. has seen significant growth in its diverse technology industry. We have more technology companies than ever, with more technology workers, earning higher wages than the Canadian technology sector average,” says Amrik Virk, Minister of Technology, Innovation and Citizens’ Services.

Growth in the number of jobs, in wages, and in the number of technology companies is a clear indication of B.C.’s supportive business environment for skilled technology workers, innovators and leaders. This is an important part of the #BCTECH Strategy to grow B.C.’s tech sector, create jobs and attract significant venture capital.

#BCTECH Strategy is a key component of the BC Jobs Plan

The #BCTECH Strategy is a key component of the BC Jobs Plan to support the growth of British Columbia’s vibrant technology sector and strengthen B.C.’s diverse knowledge-based economy. The multi-year strategy includes a $100-million BC Tech Fund and initiatives to increase talent development and market access for tech companies that will drive innovation and job creation throughout the province.

“In today’s economy, virtually every business relies on technology to help increase efficiency, safety and competitiveness,” says Shirley Bond, Minister of Jobs, Tourism and Skills Training. “British Columbia has exceptional talent and many innovative technologies originate in our province. British Columbians are clearly benefitting from a technology sector that is creating high-paying, skilled jobs.”

In partnership with the BC Innovation Council, the province is hosting B.C.’s second #BCTECH Summit, March 14-15, 2017, with made-in-B.C. tech innovations, thought-provoking keynotes and outstanding networking opportunities. To register or learn more, go to: http://bctechsummit.ca/

* Wages and salaries in the tech sector also hit a new high for the fifth consecutive year, climbing 4.5% to over $8.4 billion.

* B.C.’s tech commodity exports increased by 20.4% to just under $1.4 billion, representing 3.8% of the province’s overall exports.