December 21, 2016
by National Institute of Standards and Technology (NIST)

In science, sometimes the best discoveries come when you’re exploring something else entirely. That’s the case with recent findings from the National Institute of Standards and Technology (NIST), where a research team has come up with a way to build safe, nontoxic gold wires onto flexible, thin plastic film.

Their demonstration potentially clears the path for a host of wearable electronic devices that monitor our health. The finding might overcome a basic issue confronting medical engineers: How to create electronics that are flexible enough to be worn comfortably on or even inside the human body—without exposing a person to harmful chemicals in the process—and will last long enough to be useful and convenient.

Could be a major step in wearable sensor research

Wearable electronics, as envisioned in this brief animation, would permit the wearer to monitor not only familiar vital signs, but a host of other biomarkers in the body – potentially catching the signs of disease well before symptoms appear. 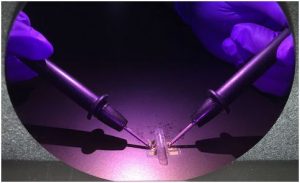 NIST research has found that the flexible plastic membrane on which wearables would be built might work better if the membrane had microscopic holes in it.
Credit: Reyes-Hernandez/NIST

Wearable health monitors are already commonplace; bracelet-style fitness trackers have escaped mere utility to become a full-on fashion trend. But the medical field has its eye on something more profound, known as personalized medicine. The long-term goal is to keep track of hundreds of real-time changes in our bodies—from fluctuations in the amount of potassium in sweat to the level of particular sugars or proteins in the bloodstream. These changes manifest themselves a bit differently in each person, and some of them could mark the onset of disease in ways not yet apparent to a doctor’s eye. Wearable electronics might help spot those problems early.

First, though, engineers need a way to build them so that they work dependably and safely—a tall order for the metals that make up their circuits and the flexible surfaces or “substrates” on which they are built.

Gold is a good option because it does not corrode, unlike most metals, and it has the added value of being nontoxic. But it’s also brittle. If you bend it, it tends to crack, potentially breaking completely— meaning thin gold wires might stop conducting electricity after a few twists of the body.

“Gold has been used to make wires that run across plastic surfaces, but until now the plastic has needed to be fairly rigid,” said Reyes-Hernandez. “You wouldn’t want it attached to you; it would be uncomfortable.” 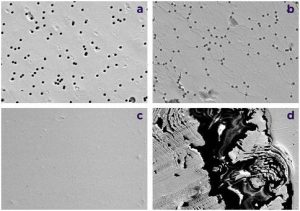 When gold wiring is built upon a plastic membrane with holes (a), bending the plastic produces only minor cracks in the gold (b), and the wire remains able to conduct electric signals. Compare this to bending gold on plastic lacking holes (c), which when bent produces far more drastic cracks (d) that would quickly break the electrical connection.
Credit: Reyes-Hernandez/NIST

Reyes-Hernandez doesn’t work on wearable electronics. His field is microfluidics, the study of tiny quantities of liquid and their flow, typically through narrow, thin channels. One day he was exploring a commercially available porous polyester membrane—it feels like ordinary plastic wrap, only a lot lighter and thinner—to see if its tiny holes could make it useful for separating different fluid components. He patterned some gold electrodes onto the membrane to create a simple device that would help with separations. While sitting at his desk, he twisted the plastic a few times and noticed the electrodes, which covered numerous pores as they crisscrossed the surface, still conducted electricity. This wasn’t the case with nonporous membranes.

“Apparently the pores keep the gold from cracking as dramatically as usual,” he said. “The cracks are so tiny that the gold still conducts well after bending.”

Reyes-Hernandez said the porous membrane’s electrodes show even higher conductivity than their counterparts on rigid surfaces, an unexpected benefit that he cannot explain as yet. The next steps, he said, will be to test changes in conductivity over the long term after many bends and twists, and also to build some sort of sensor out of the electrode-coated membrane to explore its real-world usability.

“This thin membrane could fit into very small places,” he said, “and its flexibility and high conductivity make it a very special material, almost one of a kind.”