The worldwide smartwatch market experienced a round of growing pains in the third quarter of 2016, resulting in a year-over-year decline in shipment volumes. 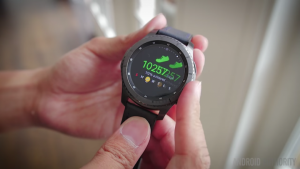 The Samsung Gear S3 is now available for preorders. It is expected to be released by the middle of the month.
(Photo: Android Authority/YouTube)

According to data from the International Data Corp., (IDC) total smartwatch volumes reached 2.7 million units shipped in 3Q16, a decrease of 51.6% from the 5.6 million units shipped during the same period last year. Although the decline is significant, it is worth noting that 3Q15 was the first time Apple’s Watch had widespread retail availablity after a limited online launch. Meanwhile, the second generation Apple Watch was only available in the last two weeks of 3Q16.

“The sharp decline in smartwatch shipment volumes reflects the way platforms and vendors are realigning,” notes Ramon Llamas, research manager for IDC’s Wearables team. “Apple revealed a new look and feel to watchOS that did not arrive until the launch of the second generation watch at the end of September. Google’s decision to hold back Android Wear 2.0 has repercussions for its OEM partners as to whether to launch devices before or after the holidays. Samsung’s Gear S3, announced at IFA in September, has yet to be released. Collectively, this left vendors relying on older, aging devices to satisfy customers.”

“It has also become evident that at present smartwatches are not for everyone,” adds Jitesh Ubrani senior research analyst for IDC Mobile Device Trackers. “Having a clear purpose and use case is paramount, hence many vendors are focusing on fitness due to its simplicity. However, moving forward, differentiating the experience of a smartwatch from the smartphone will be key and we’re starting to see early signs of this as cellular integration is rising and as the commercial audience begins to pilot these devices.”

Apple maintained its position as the overall leader of the worldwide smartwatch market, yet it posted the second largest year-over-year decline among the leading vendors. Its first-generation Watches accounted for the majority of volumes during the quarter, leading to the significant downturn for the quarter. Its Series One and Series Two did little to stem that decline, although with lower price points and improved experiences, Apple could be heading for a sequential rebound in 4Q16.

Garmin posted the largest year-over-year increase among the leading vendors, thanks to its growing list of ConnectIQ-enabled smartwatches and the addition of the fenix Chronos. Whereas other smartwatches attempt to be multi-purpose devices, Garmin’s smartwatches focus on health and fitness, and the applications reflect that strategy. Its total volumes helped close the gap further against a declining Apple and extended its lead ahead over Samsung.

Samsung finished 3Q16 slightly higher from a year ago on the strength of its aging Gear S2 smartwatches. These still remain one of the few smartwatches on the market that feature full-time cellular connectivity. The company introduced its follow-up, the Gear S3, with a Bluetooth-only version as well as a cellular version, but it has yet to be released to the market.

Lenovo (Motorola) suffered the largest year-over-year decline among the leading vendors, with multiple channels selling out of Moto 360 devices (both first and second generation) and a scarcity of its recently released Moto 360 Sport smartwatch. In addition, 3Q16 marks the first time in which Motorola did not introduce a new smartwatch in time for the holiday quarter, adding to its decline in the market.

Pebble arguably kicked off the smartwatch category with its original Kickstarter campaign in 2012. Since then the company has launched multiple variants of the Pebble watch and also introduced a new timeline-based user interface, though none of them achieved mass success. After another successful Kickstarter campaign in early 2016, Pebble released the Pebble 2 (oddly enough, the third generation) late in the third quarter. The new Pebble 2 is the first watch by the company to include a heart-rate sensor and has an overall focus on fitness.