Over the past decade, investors have pumped $4.3-billion into the development of sensors, but it’s the pattern of the 28,927 sensor patents granted since 1975 that reveal the true value and future potential of these patents, according to Lux Research. 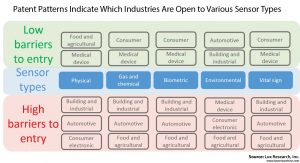 The study found that sensor patents targeted at consumer electronics and medical device industries have the lowest barriers to entry, while those patented for use in automotive, and building and industrial segments, have the highest barriers.

“While the physical sensor patent space is the most crowded, there are opportunities for component and module manufacturers even in industries that have high barriers to entry,” says Tiffany Huang, Lux Research Associate and lead author of the report titled, “Sensor Patent Landscape: Sorting through the Crowd in Search of Gold.”

“An approach focusing on unmet technical needs in each market will lead to success,” she added.

* Corporations corner most patents. Among these sensor patents, 71% have gone to corporations, with the rest going to universities and independent research organizations. Among the corporations, Honeywell holds the most — 1,354, a majority of which are for physical sensor types. Next are General Electric with 989 and Northrop Grumman with 752.

* Patent quality, not numbers, is key. Patenting is not a numbers game — quality matters. Even though Honeywell has five times more patents than Bosch, Bosch holds leadership positions in three segments: building & industrial, consumer and automotive.