Teledyne DALSA Inc., Waterloo ON-based manufacturer of high performance custom imaging solutions, has partnered with the University of Arizona in the development of three high resolution image detectors that will serve as ‘retinas’ for theOSIRIS-REx mission to Bennu, scheduled for launch today (Sept 8). 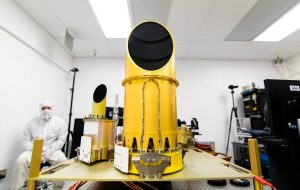 Designed, constructed and tested over the last four years, the image sensors aboard OCAMS will behave in a manner similar to human eyes, from spotting the target asteroid from more than a million miles away to monitoring the sampling process just 10 feet from the surface of the asteroid. Space-qualified and radiation-hardened, the Teledyne DALSA CCD detectors feature very low dark signal with a low read out noise, and power each of the 3 cameras that comprise the OCAMS:

* PolyCam will collect telescopic images during the approach to Bennu and high resolution images once in formation;

* MapCam is tasked with collecting color imagery and searching for satellites around the asteroid;

* SamCam is dedicated to deliver context imagery during the Touch-and-Go sample collection.

The spacecraft will reach Bennu in 2018 and return a sample to Earth in 2023.

“Our mission tries to attempt a lot of things at the same time,” OCAMS instrument scientist Bashar Rizk said. “Navigation, mapping, reconnaissance, sample site selection, sampling — we do it on the same trip, so we need to understand what is going on at the asteroid at all times, so we can make decisions in real time when we’re there. The most important goal of these cameras is to maximize the chances of successfully bringing back a sample.”

“We are pleased to contribute specialized imaging components to the OSIRIS-REx mission and congratulate the team at UA’s Lunar and Planetary Laboratory as well as our own Custom Solutions team for their contributions in furthering science through space exploration,” commented Colin Flood, Vice President, Teledyne DALSA Advanced Imaging.

Two other Teledyne subsidiaries have contributed to the mission, including Teledyne Optech, with their design of the OSIRIS-REx Laser Altimeter (OLA) which will scan Bennu’s surface and create a high-resolution 3D map of the entire asteroid, and Teledyne Scientific and Imaging, which provided a visible-infrared detector to the OSIRIS-REx Visible and Infrared Spectrometer (OVIRS) that will produce spectral maps of the asteroid’s surface that determine the mineral and organic content of Bennu.