Canada’s tech sector is a major driver of innovation and a dependable source of economic growth for the foreseeable future, indicates new research from the Brookfield Institute for Innovation + Entrepreneurship (BII+E) at Ryerson University. The report, entitled The State of Canada’s Tech Sector, has updated and broadened the definition of the sector, taking into account how pervasive of an impact technology, and technology-related jobs, has on the size of Canada’s economy and its contribution to our workforce. 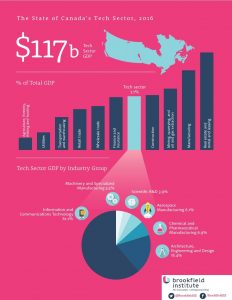 Infographic details highlights of The State of Canadas Tech Sector, 2016, a new report by the Brookfield Institute for Innovation + Entrepreneurship (CNW Group/Ryerson University)

The report states that the value of Canada’s tech sector has grown steadily, and that the sector itself is broader in scope than previous assessments, ranging from digital technologies, to aerospace and pharmaceuticals. It is a diverse, highly innovative sector that is also a significant economic driver. In 2015, the technology sector was directly responsible for $117 billion or 7.1 per cent of Canada’s economic output—greater than that of the finance and insurance industry. The tech sector also has the key attribute of being a more dependable, less volatile, source of growth than the real estate, manufacturing, extractive and construction industries, which are currently Canada’s largest economic contributors.

“The key to future economic growth and stability is understanding where Canada’s strengths lie,” said Sean Mullin, Brookfield Institute for Innovation + Entrepreneurship, Executive Director. “This benchmark study demonstrates a vibrant and diverse tech sector, and its potential as a driver of innovation and economic growth.”

Report Key Findings (based on 2015 figures):

* The tech sector was directly responsible for $117 billion or 7.1 per cent of Canada’s economic output, greater than that of the finance and insurance industry.

* 864,000 Canadians were employed in the tech sector, which made up 5.6 per cent of Canada’s total employment.

* At over $9.1 billion spent, the tech sector was by far the largest private investor in research and development.

* The tech sector was also comprised of nearly 71,000 firms, representing 6.1 per cent of all Canadian businesses.

* Over 50 per cent of tech sector employees had a university education, compared to 29 per cent across Canada’s labour force.

Also included as part of the report are regional breakdowns and a downloadable infographic, visually demonstrating the report’s key findings.

This new report comes recently after the release of BII+E’s highly cited study of the impact of automation on future employment in Canada, entitled The Talented Mr. Robot: The impact of automation on Canada’s workforce. Following up on that research, The State of Canada’s Tech Sector, 2016 is designed to shift our understanding of technology beyond disruption towards its broad economic impact.

“A renewed focus on the tech industry is crucial for Canada’s ongoing prosperity,” stated John Ruffolo, Chief Executive Officer of OMERS Ventures. “Especially considering the volatility and finite nature of the commodities industry, it is critical that we ensure that our tech sector becomes a sustainable source of growth.”

The Brookfield Institute for Innovation + Entrepreneurship (BII+E) is a new independent and nonpartisan institute, housed within Ryerson University, that is dedicated to making Canada the best country in the world to be an innovator or an entrepreneur. BII+E supports this mission in three ways: insightful research and analysis; testing, piloting and prototyping projects; which informs BII+E’s leadership and advocacy on behalf of innovation and entrepreneurship across the country.