Microsoft officially opened the doors of the Microsoft Canada Excellence Centre (MCEC) in Vancouver, a state-of-the art development facility that will create innovative products for the global market and develop technology talent in British Columbia. 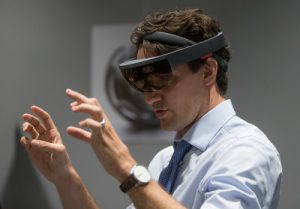 Prime Minister Justin Trudeau experiences Microsoft HoloLens at the official opening of the Microsoft Canada Excellence Centre in Vancouver. The facility is designed to be an incubator of new technological talent and innovation.

“Vancouver is becoming a global centre for technology, and we’re committed to helping grow Canada’s innovation economy.” said Microsoft President, Brad Smith. “Our new development centre will bring talented Canadians together with leading talent from around the world to help develop the technologies of tomorrow.”

The MCEC will allow Microsoft’s presence in Vancouver to grow to more than 750 positions. It will inject $90-million in direct investment in the city annually. Across the province, it will have an estimated economic impact of $180-million each year. 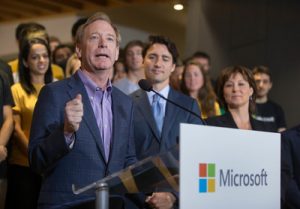 “There is no better time to invest in Canada,” said Prime Minister Justin Trudeau. “I welcome Microsoft’s decision to add as many as 450 new development jobs to their Vancouver operations – it is a real vote of confidence in the community, and in the talent and expertise of Canadian workers.”

Microsoft chose Vancouver because of its strong technology ecosystem and British Columbia’s network of globally recognized universities that provide a robust talent pipeline. The centre with its close proximity to Microsoft’s global headquarters, gives the company’s local developers and interns the opportunity to collaborate on projects as part of a diverse team of professionals. The Seeing AI research project is one recent example of Microsoft interns and developers collaborating with those based at Microsoft’s headquarter in Redmond, Washington. The research project, being developed to help the visually impaired, was introduced this Spring by Microsoft CEO Satya Nadella. 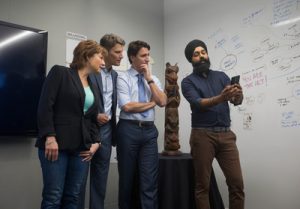 “The centre will serve as yet another gateway between British Columbia and the world.” said the Hon. Christy Clark, Premier of British Columbia. This is further evidence of the talent and potential that Vancouver and the B.C.’s thriving tech sector have to offer, and we’re pleased that Microsoft has made such a strong commitment to the future of innovation in this province.”

The MCEC will house developers from the Vancouver region, across Canada and around the world, as they bring to life new technologies and applications ranging from apps (Skype, OneNote, MSN) to gaming products (Gears of War), interactive television app (NFL for Xbox and Windows 10), mixed reality (Microsoft HoloLens) and ground-breaking accessibility products (Seeing AI).

“It’s no coincidence that Vancouver’s nation-leading economy is also the home to world-class tech talent filling 75,000 technology jobs with another 15,000 expected in the next three years,” says Mayor Gregor Robertson. “Vancouver’s diverse and entrepreneurial tech ecosystem is a big draw to leading global companies like Microsoft who, time and time again, choose Vancouver as a centre of innovation and excellence.”

The MCEC is located in the heart of downtown Vancouver in a remodeled 142,000 square foot space in the Granville Centre. It features the latest architectural designs, and floor-to-ceiling views of the city and surrounding mountains.  Designed by architect Clive Wilkinson, it boasts two 150-person multi-purpose community rooms, and both open and closed collaboration spaces. It also has a “Maker’s Garage,” an outlet for experimental projects with both hardware and software, that incorporates new design features to enhance productivity.