Driven by growing demand for its standard and customized enclosure products, Hammond Manufacturing Company Ltd., has constructed a brand-new 119,000-square-foot facility in Guelph ON, bringing its Guelph footprint to approximately 450,000 square-feet and 600 employees. 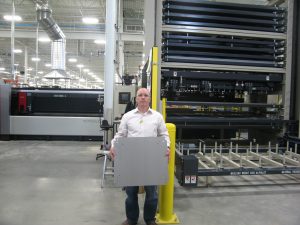 The building (on Wilbert Street) features a state-of-the-art powder paint line, along with new advanced equipment, process improvements and facility modifications. With construction commencing in June of 2015, the firm took official possession early this April.

“We reached a point where it became necessary to expand our painting line at the original building (situated nearby on Edinburgh Rd North), so we took this quantum leap,” says Steve Menegotto, general manager – datacom/electronic metal (Wilbert facility).

The freshly installed flexible manufacturing system includes a newly acquired punching and laser cutting system that are expected to double capacity for data/comm products, while also improving customer service and quality of product, according to Menegotto.

“The new building will employ close to 100 people,” says Menegotto, who has been with the firm for 20-years. Priding itself on its enclosure modification services, approximately 50% of Hammond’s 19” cabinet business in Canada involves a modified product. This can include 19” cabinet assembly with specific specs for a window or door, shelves or vented door in rear.