Representing the largest industrial trade show in the world, with more than 5000 exhibitors and 250,000 attendees from more than 70 countries, the Hannover Fair in Germany was visited by a couple of special guests this week – making three German-based electronic suppliers excited hosts. 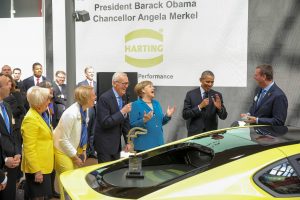 The visit is a notable highlight in the history of Harting, as the firm ranks among the top five largest exhibitors at the Hannover Messe. In addition, Harting is one of the few companies which have been present every year since the trade show began in 1947.

The two heads of state met with Frank Stuehrenberg, Phoenix Contact CEO, and Jack Nehlig, president of Phoenix Contact USA as part of the morning opening of the Hannover Messe  exhibition.  Obama’s presence is a sign of appreciation of the close economic relations between both countries, according to Nehlig. 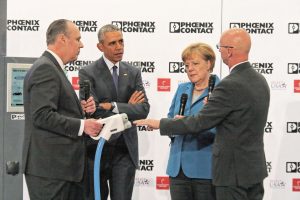 “We are honored that President Obama and Chancellor Merkel took the time to visit our company during their Hannover Messe tour,” says Nehlig. “Phoenix Contact USA is an outstanding example of the SelectUSA initiative and how German investment in the U.S. market can benefit both countries.”

Rittal Corp., enclosure manufacturer and supplier of thermal management of electrical, electronic and IT equipment, hosted the large delegation in its booth – which focused on the theme of ‘Integrated Industry – Discover Solutions’ featuring products and solutions that deliver on the promise of Industry 4.0.

“We were honored to host the President and have the opportunity to showcase our newest technology to him,” said Gregg Holst, president of Rittal North America. “Technology innovation certainly is important to America’s ability to remain at the forefront of global manufacturing capabilities. We were excited to share our story with him about how Rittal products make a real contribution to American manufacturing’s competitive advantage.” 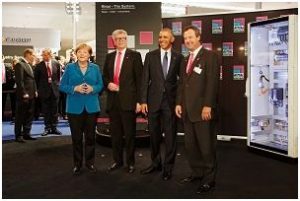