Active matrix organic light-emitting diode (AMOLED) displays are rising fast, thanks to lowering costs, wider use in end-market consumer electronics devices and the ramp-up of new manufacturing capacities.  While liquid crystal display (LCD) technology is still the dominant technology in the display industry, AMOLED display shipments will grow 40 percent, year over year, to reach 395 million units in 2016. AMOLED display revenue is expected to increase by 25 percent, to reach $15 billion in 2016, according to IHS Inc.

“AMOLED is becoming the shiniest spot in the flat-panel display industry,” says David Hsieh, senior director, displays at IHS Technology. “AMOLED has a simpler structure than LCD, as well as a thinner and lighter form factor, better color saturation, greater contrast ratio, faster response time and easier integration with touch functions. In addition, AMOLED is formed on a polymer base substrate, allowing it to be flexible, bendable and even foldable. The organic electro-luminescence materials can be formed using a soluble printing process, which means AMOLED has the potential to be produced at a very low cost.”

Many of the obstacles to AMOLED development, such as production inefficiencies, yield-rate management issues, higher investment costs and a short lifetime for light emitting materials, were also resolved in 2015, improving the production. OLED has started to find its niche in many applications, especially in smartphones, smartwatches, automotive displays, home appliances, near-eye virtual reality (VR) devices and televisions. “Improvements in production and lowering costs are attracting more device makers to install AMOLED displays in their products,” Hsieh says.

For example, Samsung Electronics has been using AMOLED as an important differentiator in its proprietary Galaxy smartphones. Since the second half of 2015, more smartphone brands — especially manufacturers in China — have installed AMOLED displays in their devices, such as Google, Microsoft, Meizhu, Blackberry, Huawei, HTC, ZTE, Oppo and Coolpad. The 5-inch high-definition (HD), 5.5-inch full high definition (FHD), 5.5-inch and 6-inch wide quad high definition (WQHD) will be the major AMOLED smartphone display driving forces in 2016.

AMOLED penetration in smartphone displays is expected to rise from 17 percent in 2015 to 21 percent this year. Apple is reported to be considering AMOLED as a display source for its new iPhone in late 2017, replacing the current low-temperature polysilicon (LTPS) thin-film transistor (TFT) LCD display. “If Apple actually starts using AMOLED displays, the transition will be viewed as a milestone in flexible form factor development,” Hsieh adds. 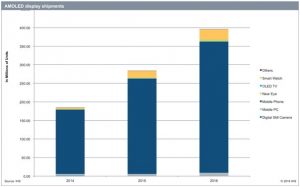 According to the IHS OLED Display Market Tracker, OLED TV shipments will further expand in 2016, thanks to process improvements and production efficiency enhancements, as well as improvements in organic light emitting materials layers. In fact, LG Display is already expanding its AMOLED TV panels to 65 inches with ultra-high definition (UHD), which will bring AMOLED into the high-end TV segment. IHS expects OLED TV display shipments will grow 125 percent, year over year, to reach 900,000 units in 2016.

Tablet and notebook PCs is another important venue for AMOLED, for its slim and light form factor, and high resolution. We expect to see 8-inch and 9.7-inch quad extended graphics array (QXGA) displays and 12-inch AMOLED panels begin to emerge in the mobile PC arena this year. Many PC brands are planning to use AMOLED in notebook PCs and two-in-one convertible mobile PC models beginning in 2016. AMOLED mobile PC panels are expected to grow 63 percent year over year, to reach to 8.6 million units in 2016.

AMOLED is also leading other display technologies when it comes to response time and power consumption, which is extremely useful in near-eye display devices, including VR and augmented reality (AR) devices. AMOLED display and OLED on silicon projection displays, which are both used in near-eye displays are forecast to grow 119 percent, year over year, to reach 3.6 million units in 2016.

“The central information display in cars will also feature AMOLED within the next couple of years,” Hsieh says, “AMOLED displays provide features that are useful in automotive display applications, because of their high contrast ratio, flexible and curved form factors as well as better color gamut. Aside from these applications, AMOLED also presents great opportunities for industrial applications, home appliances, digital signage and broadcasting.”