Technology for self-driving cars is accelerating

But are Canadians ready to take their hands off the wheel?

As Kia unveils its vision and roadmap for a fully autonomous vehicle at the Consumer Electronics Show (CES) in Las Vegas NV this week, Canadians appear to be evenly split on their desire for a driverless car, according to the findings of a survey conducted by Toronto-based Kanetix.ca.

“With companies like Google and major auto manufacturers obtaining permits to test autonomous technologies, these vehicles could be a reality in the next few years,” says Andrew Lo, chief marketing officer at Kanetix.ca. “While it is fun to imagine the possibilities these innovations present, we wanted to find out from Canadian consumers how they truly felt about the possibility of sharing the road with self-driving cars.” 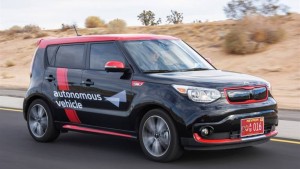 The survey finds that one in four Canadians cannot wait for the day that driverless cars will be available, and almost as many say no thanks, they love driving too much. The majority of Canadians are more tentative, with 52 per cent saying it would depend on the technology and how well it works before they would make a decision.

In terms of geography, Western Canadians are the least likely to want the driverless car with Quebec and Ontario being the most enthusiastic. There are also differences among age and gender. Almost twice as many males as females want driverless cars, and the younger demographic, age 18 to 34, are the most excited.

An overwhelming majority of Canadians say driverless cars will be safer. Fifty-one per cent believe there will be fewer accidents, and 61 per cent think the elimination of risks like speeding and drunk driving will be the among the best outcomes of driverless vehicles. Only time will tell if these benefits will come to fruition, and what, if any impact, they’ll have on car insurance rates in Canada.

Other benefits include a more enjoyable and relaxing drive (39 per cent), less stress (35 per cent), and not worrying about parking (22 per cent). Nineteen per cent think a driverless car is just “plain cool.” It is not surprising that in Ontario, with some of the busiest and longest commuting times in the country, a less stressful commute was considered one of the top benefits of a driverless car.